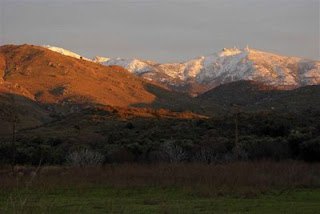 I'm not that quickly scared, and especially not on this island. It might happen that your pile of wood gets stolen, two years ago at restaurant Anatoli some of those huge red clay urns disappeared, some weeks ago a bicycle was stolen in Petra and last winter in Petra a clothing shop was robbed in the night and the income of a sales weekend disappeared into thin air.

In the summer you have to be more careful because not all tourists come for the same reasons. But in general there is not that much crime here on the island. You never hear about a stolen car and we are always pretty amused at seeing people going on safari, climbing out of their jeep and locking it. First of all there's mostly nobody around to steal the car and secondly where would they hide with a stolen car? No way coming off the island. Also theft from a car is not known here.

All villages on the island are small communities and when something happens, within no time everybody will be informed through the tam tam. Last week again Lesvos was in the news on the national television. Not because we had some fantastic warm days, or another mud stream that overflowed Kaloni, this time it was a woman who went missing. The days that she was not found were kind of creepy.

The 31-years old Anastassia Hadzidiakou had the small gambling shop in Molyvos. There you could place your bets, buy lottery tickets and whatever you wanted to gamble on. There is pretty much compulsive gambling going on on this island. Sunday night, the 11th of December, she had a meeting with a 24-years old customer who owed her 14,000 euro. That is quite some money that you will not earn that fast picking olives. She received the money and was on her way back, she told her fiancée who was waiting for her in Petra. And then nobody heard from her or saw her again. This was the first gossip of the story going all around the island on Monday.

Lots of citizens and police searched around Lepetimnos for her and her car, both seemed to have disappeared from the earth. Planes and helicopters flew on and off, police cars were driving at high speed to and fro along the roads. Wild speculations about what could have happened were running fast. Did the boy who owed her money set her up, did she have a secret lover with whom she went partying, some bad mouths even thought her fiancée had something to do with her disappearance. The North of the island was pretty much in commotion. Whoever you met, first question was always: is there something new about Anastassia.

On Tuesday most people agreed that she probably was not anymore alive. Police from Athens flew over and a big search was set up. They found out something irregular: The boy who was to give Anastassia her money lied. Anastassia was seen driving through Stipsi, so their appointment was not in Vafios. To the fiancee of Anastassia who phoned in order to ask where she was, he said that she forgot her telephone in his car and this was a lie too. He was severely questioned and he admitted to the murder... It took until Wednesday night that they found the body and her car...

They probably had a fight over a bet that he placed on the same day. Because he owed her money Anastassia did not place the bet. A pity because otherwise maybe nothing would have happened because then the boy would have gained a lot of money. He had just a little knife on him and that might be why he stabbed her over 40 times. He threw her in his car, drove to Lepetimnos where he threw her in a small drinking pool for the sheep. It is said that she still lived for another 4 hours... He hid her car under a tree on the way from Clio to Tsonia.

It is a real horror story, also because so many people knew her and the places where it all happened. Monday and Tuesday did not feel good on the island. What could have happened and was there a murderer going around? Just like last year when 3 young boys got killed in an accident, this was the talk of the day for the whole week.

We recently asked a friend who is a lawyer on the island what cases he got. No murder cases, he answered, because a murder only happens once in 10 years on the island. However, this was the second murder of this year. Last March a man was arrested because the remains of a friend were found in his fireplace. He blamed his wife for the killing because she was jealous of the girl friend.

Since the temperature dropped this night the Leptimnos towers white above the woodlands as if on its slopes the horrible things never happened. Even this paradise-like island knows it's murders for passion and it's killings for money. It is not a peaceful story about the island I am telling you just before Christmas. However, I do wish you all a very merry Christmas from an ice cold Lesvos. 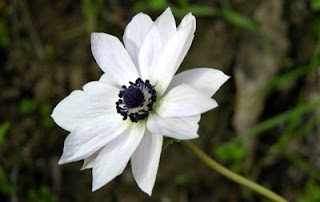 What a strange subject, you will think. Tulips in the midst of December. Well, I was looking that dumbfounded when I was planting tulips in our garden and discovered daffodils on the verge of blossoming. With Christmas we will have Christmas daffodils!

For my birthday I got a large packet of various flower bulbs. In fact I only asked for tulips from Amsterdam. The giver did not realize that crocus, iris, anemones and daffodils all grow in abundance on the island. I was happy to be able to put a lot of merry coloured crocus in the ground. The autumnal crocus just disappeared and for spring here they do not know any crocus.

The bright yellow daffodils from Holland got a place just next to their Greek fellows, the pale yellow daffodils. When they hurry up I will have for months at a row blossoming daffodils. However I hesitated planting the anemones. In a few weeks these flowers will be colouring our landscape, the first anemones last winter were out on the 1st of January. To put cultivated anemones near their wild sisters... The same thoughts were for the iris. In a little bit of time there will be plenty of them all around.

I was pretty happy with the snowdrops. As far as I know they do not exist in the Lesvian nature. Well, that is a pity because these white fragile flower heads bungling from a green tiny stem might be the most prettiest harbinger of spring. I really do hope that they will not get mixed up by our strange weather. A few days it was cold, these last days the sun shone away the chilly northern wind and today it is lovely and warm. However, when those small white beauties like it here and multiply, know that when you will discover them here in some ten years they originally came from Amsterdam.

The flower bulbs coming for sure from this region are the tulips. In the 16th century the famous tulips from Amsterdam were imported from Turkey (Lesvos in that time was under Turkish rule). In the midst of the 17th century there was even a 'Tulpo mania' in Holland: the bulbs were precious merchandise, they were subject of speculation and crazy prices got paid for them. One man once changed 2 loads of grain, 35 litres of beer, 2 loads of rye, 1500 kilo of butter, 4 fat oxes, 500 kilo of cheese, 12 big sheep, 1 silver cup, 5000 litre of wine and one pack of fabric against one tulip bulb! When this craziness was over like with a crash on the stock market many Dutchmen went broke. Now nobody speaks anymore of Turkish tulips. The Dutch took over the commerce and got world famous for it.

Some books say that there are tulips here in the Lesvian nature. For sure they are on the island of Chios. But I did not find them. Where is the tulip hiding on this island?

Lesvos is not famous for its spring flowers nor for it's cyclamen which make the autumnal landscape so pretty. Lesvos is famous for its olives and at this moment you can learn everything about this harvest. Everywhere you hear the sound of the click-clacking of the sticks against the trees, the chatter of the women picking the olives from the ground, the panting of the men carrying the loaded sacks to the cars, the mount of olives growing by day at the Olive Presses.

It is a good year for the olives. Thanks to the bad harvests in Spain and Italy the Greeks get a good price for a kilo of olive oil (In Greece they do not know litres but all is calculated in kilos) and the trees are just loaded with dark blue black olives. So many an olive farmer can bring in workers. And these days even labourers are well paid: 30 euro a day. Which makes everybody happy. Even the weather seems to cooperate. It looks like spring here on the island. And that is what the daffodils thought as well.