In the Netherlands the birthday of Saint Nicholas, December 5th, is a big celebration, especially for children. Each year he arrives with his steam ship from Spain. But why Spain? He is a copy-cat of the bishop of Myra, whose remains – according to many people – are buried in the Saint Nicholas Basilica in Bari, Italy. In his home town Demre, in modern day Turkey, a crypt with his remains has never been found. It is said that, around 1087, some 700 years after his death, Italian merchants took his bones to their homeland.

That is the story. A story that never ends: just look at Saint Nicholas' knight, the black Piet, who so irritates many coloured immigrants in the Netherlands with his dark skin that he will soon change colour.
Last month under the church in Demre a grave was discovered and now archaeologists think, because it looks undisturbed, the bones of Nicholas of Myra must be in that crypt. Did the Italian merchants fool everybody?

We cannot be sure yet, because they have only detected the grave with electronics. To really touch it an antique mosaic floor must first be lifted, which will take some time. Of course this might just be a publicity stunt to attract some tourists to Turkey. Although I do not know anybody who has ever visited Saint Nicholas in Bari, nor in Spain where his address is unknown.

Why so far in the cold? Santa Claus should live in Turkey, not far from the grave of Saint Nicholas, bishop of Myra, or even better, in the United States, this way he has to travel less. Because Santa Claus is just the American version of the Dutch SinterKlaas , who only had time for the American children at the end of December. Santa Claus is a copy-cat of a copy-cat.

In Greece neither Saint Nicholas or Santa Claus have anything to say, even that Mr. Christmas is trying hard to gain some influence. In Greece it is the bishop of Myra who gets honoured on his namesday on December 6th: Agios Nikolaos. However, no Greek will ever dare to dress like this saint and visit parties. In most cultures the bishop of Myra is known to be a protector of children. The Greeks chose another story from his miraculous life: one day he rescued a bunch of sailors from a heavy storm and that is why he became the patron saint of the seafarers.

He is needed very badly these days. The small boats keep on coming from Turkey and the winter with its nasty weather has just arrived. Refugees even have more than one patron saint, like Saint Alban and Saint Frances Xavier Cabrini, although they are a bit obscure. Saint Cargo is the latest patron saint for refugees. Even though he is created by the German art duo Various & Gould and he has not yet visited the Pope to get canonized, but with his present deeds he might gain popularity with a greater public.

I do not know if Lampedusa claims Saint Cargo's grave. If not, we should do that on Lesvos. Saint Nicholas could help to remove his remains in his steam ship, that may refresh Saint Nicholas' dusty CV. The crypt will be placed in Camp Moria, because Camp Moria urgently needs a saint! 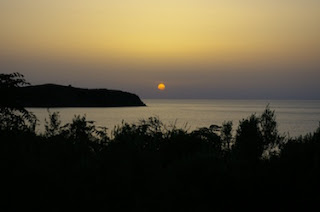 In memoriam for the 3 unknown (refugee) people,
at least 2 of them children estimated 9-13 yrs old,
washed ashore on Lesvos in the second week of November 2017

Somebody must have seen you
when you were born.
Your mother that is
and perhaps your father
or was he away
fighting, or just defending the family?

Somebody must have fed you
because you have lasted some years.
Were there toys around you
where you spent the first years of your life
learning this cruel world
while playing between ruined houses?

Somebody must have thrown a bomb
or triggered a nasty gun
tearing apart people and homes
instilling an endless fear.
Did your mother die
or was it somebody else from the family?

Somebody must have taken the decision to flee,
you were too young to make that choice
and had to follow mother, or father
or, maybe it was an uncle
who tried to bring you to safety
together with maybe a brother and a sister.

Somebody must have protected you
on the road in the cold.
Maybe having to sleep under a naked sky
putting a warm blanket around you
whispering in your soft ear
that not everywhere are there bad people.

Somebody must have told you
about safe countries without a war.
Giving you sweet dreams
about a new and shiny life
where you can trust people
who do not kill.

Somebody must have told your protector
where to take a boat to this new life.
Or were you already on your own
having lost your family
just taking care of your siblings
trying to get them to a promised land?

Did somebody see you when you touched the water
or were you asleep and given a shock.
Or were you pushed
or was the boat not resisting the waves?
Did you cry out for your mother
or were you only concerned for your brother and sister?

All the somebodies who were in your life
do not know that you are now gone.
Into a sea that took your breath
into a heaven, of that I am sure.
Or were the somebodies you have known
long gone before you touched the water?

So many godless somebodies
who never learned to love.
Making war and killing not only you
but so many other innocent souls.
Turning them into nobodies
forgotten even before the war is over.

I am somebody reading your story
taking you into my heart.
Crying for you and telling the sea
how cruel it has behaved.
But it was not the sea (but somebody)
who decided your life was over. 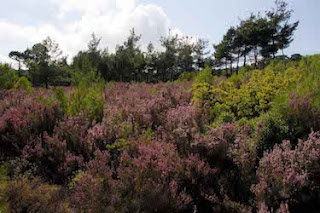 (The moor at Lesvos)

You might not expect it on a Greek island, but well hidden amidst the light green pinetrees, heather fields colour their environment deep purple during these magnificent autumnal days. You may see some of these plants along the main roads, but the best heather experience you will have is at Alogeli, a little north of Megali Limni.

Finding your way through the pine forest, a melody plays high through the waving treetops, that might well be coming from the god and musician Orpheus, whose head and lyre came ashore at Old Andissa. It’s said that since then his music can always be heard. When arriving at the moors, another concert also plays: millions of heather flowers attract thousands of bees who – without a director – buzz madly along. The soft buzzing is another music to listen to and wonder about.

I imagine that bees buzz out of happiness, seeing those sweet scenting flower fields. The scientific explanation for their music however is less romantic: what you hear is the crackling of their skeleton. While a bee flies, their bones crack up and down a 190 times per second, a soft sound we interpret as buzzing.

Making honey will probably produce another specific sound, although I have never ventured close enough to the many beehives parked all over the island to be able to research this. As a child I learned from Winnie the Pooh that you could steal honey unpunished, but now I know better: many a tourist on Lesvos, curious about the beehives, has had to run, fleeing from a swarm of bees. Honey on Lesvos gets very well defended!

And on Crete: There Zeus was brought up with honey in a well hidden cave, prior to starting his career as leader of the Olympic gods. It is said that since then the bees stayed behind in the cave and attack anybody who dares to enter the cave. Four thieves thought to be clever and dressed all in bronze, but as soon as they had tasted Zeus' honey, their bronze and other clothing fell from their bodies and huge bees started an attack. Zeus wanted also to punish them by sending deadly lightning, but Themis, goddess of fate, didn’t like the idea of people being killed in the sacred cave and changed the thieves into birds.

The discovery of honey was made by Dionysus, the bon vivant of the Greek gods. The less famous god Aristaeus learned how to keep bees. This very first bee keeper could not resist the beauty of the nymph Eurydice, but she was the promised bride of Orpheus, so she ran, not wanting to record another #MeToo. As she panicked she did not watch out and was bitten by a deadly snake and died. Orpheus was inconsolable and dropped all music, making the gods untuned. As punishment all the bees of Aristaeus died, which made him inconsolable. Orpheus could bring his bride back from Hades, provided that he did not look back, which he did by accident, thus condemning Eurydice to stay forever in the underworld. The gods also pitied Aristaeus and he was commanded to make an offering of 4 cows and 4 bulls whilst letting their bodies remain untouched. He succeeded in doing so and in the cadavers were born new bee peoples Aristaeus could place back in his hives.

Not many such stories are told about heather, even though it must have been a very satisfied god who created the heather fields as a reward for the bees: their nectar brought up more than one son of the gods and on many old Greek coins a bee is depicted. Was it Pontia, who during the Minoan culture was called Mother of the bees? Or was it Apollo, who got the gift of prophesy from three bees? Or from Demeter of Ephese who had a bee as one of her holy symbols? It is clear that the mythology here lacks some history.

Greece is the second country on the list of numbers of beekeepers per square meter (Hungary is first). So honey still is richly flowing. But the gods seem to care less these days: Greek bees also suffer from Colony collapse disorder. However, wandering along the Lesvorian moorlands, there seem to be still enough bees to provide the entire island and all the gods with this divine honey.