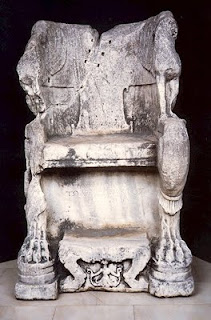 (The Throne of Potamon; photo from the internet)

In a few days it will be Easter and this year it will be celebrated on the same day in both Orthodox and Western European countries. In Greece, the summer season starts with Easter. Everywhere people are busy making everything ready for the tourists and on Monday the 11th all the villagers seemed to have fled their homes in order to clean the streets and beaches. Not only in Molyvos, but everywhere on the island, the municipalities have no money for cleaning – so lots of people have volunteered to drag huge garbage bags to to every nook and cranny and to pick up the mess. Schoolchildren were free to participate, so everybody worked together to make the island ready for the season. In this, the crisis has been good for at least something; because the roads and beaches have never looked this clean.

Serious tourism on Lesvos started only in the Seventies. Greece was then still a cheap country to visit and most of the tourists were backpackers and island-hoppers travelling from one island to another. Now this group has moved in the direction of Asia where life still is cheap and most tourists visiting Greece now have pre-booked their hotel and plane before they start travelling.

Centuries ago this was different. Then the word tourist did not exist. You had travellers, of whom small numbers were going around the world. Some of them were writing diaries about their travels and some even published their experiences after they came home safely.

Possibly the very first travel guide was Description of Greece (Ἑλλάδος περιήγησις) written around the second century BC by Pausanias, a native of Lydia. In the 18th century diaries of travellers, like those of Thomas Cook, were very popular and in the 19th century it was the novelists (like Gustave Flaubert, who wrote about about his travels to Egypt and Greece and George Sand who published Un hiver à Mallorca in 1842) who started to travel and publish tales of their adventures,

In earlier times travelling was far more dangerous than nowadays and you had to be a real adventurer to take to the road. When you read the chilling stories of the Englishman William Allen in his travel book The Dead Sea (1855), you would definitely prefer to stay home. It was just here in the Aegean Sea that he was twice attacked by pirates and once was shipwrecked.

The Dutchman Jan Somer, who departed for Spain in 1590, not only visited many countries, but nearly drowned and was captured and enslaved. He had many adventures in Constantinople (now Istanbul). He is one of the few people at that time who wrote a little about the island of Lesvos in his journal Reise naer de Levante.

However, according to Frans R.E. Blom, a researcher at the University of Amsterdam, the very first real Dutch tourist visiting Lesvos and writing about his experiences was the son of a Dutch regent: Gerard Hinlopen from Hoorn. This young man departed in 1670 for a two year journey towards the unknown world and after seeing Spain and Italy boarded a fleet with the destination of Smyrna (now Izmir) in the Ottoman Empire. In Smyrna, having had enough of his travel companions, he disguised himself as a Turk and set off with a Turkish shipper along the coasts en route to Constantinople.

This is how Gerard Hinlopen came upon the island of Lesvos and he wrote down entertaining descriptions amongst others about the castle of Mytilini, the hot baths, the aqueduct of Moria and, as he was a bachelor, he praised the Lesviot women. Then he made a great discovery. Monks showed him a stone chair that they had dug out of the earth. It was beautifully carved out of a single piece of marble. Its inscription was carefully noted down by Hinlopen. On his return home he had the inscription translated and after some archaeologists discussed the matter they agreed that this was the Throne of Potamon. Potamon was the son of Lesbonax, a famous orator who was also known for his advocacy of Lesvos during his long stay in Rome at the court of Cesar Augustus, where he tried to winkle out some favours for his island.

When the rumours hit the grapevine about this archaeological find, more and more visitors came to Lesvos in order to see this marble throne: it became the first attraction of Lesvos, described by more than one traveller (Old Tracks and new landmarks by Mary Adeleid Walker [1897] and Travels & Discoveries in the Levant by Charles Thomas Newman [1865]).

If we believe the travellers of many centuries ago Lesvos was famous for its antiquities. After the occupation of the Ottomans however not much was left. Greek cultural landmarks were destroyed or used to make new buildings. Today, Lesvos’ biggest attraction is thousands years older than all those cultural antiquities - but it is a geographical treasure: the Petrified Forest that opened to the public in 1994. Reading the old travel diaries we get a glimpse of how Lesvos used to be (for instance Mary Adeleid Walker’s description of her difficult travel from Mytilini to Molyvos and Petra). Thanks to these reports we also know that Lesvos used to be famous for something quite different than the Petrified Forest: the Throne of Potamon.

When more and more travellers came to have a look at the throne, the marble block was placed in the house of the archbishop. Even then people were trying to lay hands on it, like the French ambassador to Constantinople, Marie-Gabriel Choiseul-Gouffier. The famous Lord Elgin, although he did manage to get part of the Parthenon front, did not succeed with the Throne of Potamon. The throne still sits on the island. 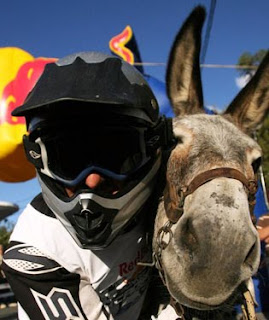 All over the world however goat milk is drunk sparingly and also used for the production of tasty cheeses. Is there any other milk besides that of a goat or a cow? Yes, indeed there is. All female mammals give milk when they have younglings. For instance, donkey milk, which is only known to most people as the cosmetic used by Cleopatra to bath in.

Some spouses of Roman emperors, like Poppaea Sabina, the second wife of Emperor Nero, tried to be as beautiful as Cleopatra and washed themselves with asses milk. They didn’t worry that donkeys did not give as much milk as a cow, they had plenty of money to keep hundreds of donkeys just for their beauty.

What they probably did not know in that time was that of all the different animal milks - donkey milk is the closest to mother’s milk and also far more healthy than cow milk. Asses milk contains less fat, more proteins and some 60 % more vitamin C. Donkey milk also has no harmful bacteria so you do not have to pasteurize it. So why do we not drink donkey milk?

The oldest woman in the world lived in Ecuador. She died at the age of 116! After her death her children told the press that the secret of their mother’s great age might have been regular drinking of donkey milk.

Here in Greece they do not drink donkey milk. The big number of donkeys that Greece used to have were used for transport or to mill grain or olives. For example a donkey could walk forever in circles to get the olive oil out of the olives. Now that machinery and cars have put the donkeys out of work, the number of donkeys in Greece have decreased so much that they could almost be added to the list of endangered animals.

Of the Greek donkeys that are now still around, most have a lazy life, except for some like those on Santorini, where donkeys are exploited to carry tourists up and down the volcano. The not working class of donkeys roam through the landscape and along the streets, enjoying bright green grasses (off course they prefer to eat everything you planted in your garden) and some times they take a little safari with tourists on their backs.

Lots of donkeys here on Lesvos in the winter are free – except for those who work a bit in the olive harvest – and roam through the mountains where they find plenty of young green plants. Last week the donkeys of Michalis and Costas, our local donkey farmers, got even more lucky: they went for a holiday! Well, it was a working holiday because they had to participate in a donkeycross.

Can you imagine: around a hundred donkeys boarding the ferry in Mytilini? I do not know if they were sea sick, but I just saw them now here in Eftalou making their first safari of the season and they looked pretty happy to me.

Their journey was to Makrinitsa, a traditional village in Pelia, close to Volos, where the booze company Red Bull organized the ‘donkeycross’. I have never heard about a sport called this: obviously it is a combination of motocross and donkey riding. Thirty illustrious motocross drivers were invited to make the streets of Makrinitsa dangerous by riding both their iron bikes and donkeys. No easy job driving a motorcycle along the old village steps, a water basin and steep donkey trails. Riding a donkey looks more easy, except that donkeys do not like to be ordered around, especially when you try to get them in gear to reach the finish line. The effect was hilarious. And now I understand why the youngsters of Molyvos run their motorbikes through the small cobbled streets and steps: they are practising for a ‘donkeycross’ because, believe me, Molyvos is more than suitable for such an event.

Until now only the donkeys of Molyvos had a taste of this joyful event: they toted those sturdy motor devils with their helmets and leathers through Makrinitsa, although it seemed to me that more than one participant had to drag his donkey to the finish line. So when you ride a donkey here this summer imagine that the saddle you are sitting in might have been used by one of those famous motor riders.

Besides riding these four legged animals there is another use for a donkey. That is why I give my golden advice to Michalis and Costas: open a donkey dairy. Last February in London the launch of selling mother’s milk ice cream was covered worldwide by the press. An asses milk ice cream, after a tiring donkey safari, might be the right refreshment. And when you can make cheese out of mother’s milk – like the Dutch artist Ine Poppe did in 1984 and as was done last year by the restaurant Klee Brasserie in New York, that also added ‘Mommy’s milk cheese’ to it’s menu - I am sure you can make donkey milk cheese. Plenty of donkeys here, aren’t there?

A farewell to Tony 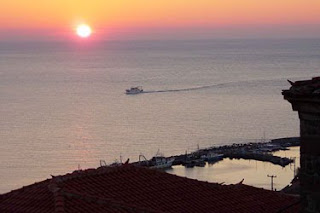 Now that I finally changed as well in also
Now that you teached me fishes are fish
And after so many other English corrections
You left us.

Here in the little town of Molyvos
For decennia you came back again and again
And now Molyvos lost another
Of its big writers.

Tony, thank you for everything!