December 17: The Club of Love 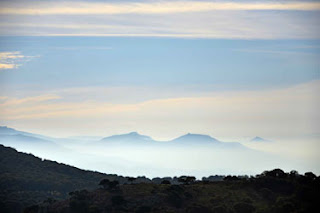 (A divine landscape on Lesvos)

In ancient times, when the gods on Olympos still reigned over the Hellenic people, there was a god for everything: for love, commerce, war, the harvest, the army, wine, weather or whatever there was. Each god jealously guarded his own department, defending it against the trespass of any other god, leading to quarrels and even wars. The gods were then anything but nice to either their fellow gods or to human beings.

The Gods ruled with rods of iron and there was no place for charity. Although sometimes there was the odd god or one of his offspring who would take pity on humans. Prometheus, a son of Titan Iapetos (god of immortality) gave humans fire in order to defend them against the many violations of Zeus. He was soundly punished for that by being tethered to a mountain where an eagle ate his liver. Even worse, the liver regrew each night and so the eagle came each day.

The Greek poet Aeschylus visited this myth in one of his plays: Prometheus Bound. In this play the fettered Prometheus refused all help, because he knew something with which he could blackmail Zeus. Hermes, God of commerce and messenger of the Gods also tried to mediate on his behalf, but Prometheus did not want to tell the secret. The enraged Zeus gathered together all the Gods of the weather who caused such bad weather and natural disasters that Prometheus perished by falling into an abyss.

But let us go back to the beginning of this play, when humans still lived in dark holes, always afraid of the fury of Zeus and his threats to destroy them. Prometheus was apparently a nice guy because he decided to help the people. He stole fire from the gods of Olympos and when presented with this phenomenon humans could better defend themselves and developed hope for the future. In the play this kind character of Prometheus was, for the first time, given the name philantropos, from which the word philantrophy comes. Charity in Greek is philantrophia (love [philos] and humanity [anthropos]), and so I suppose we could say that Prometheus is the God of charity and Greece the homeland of charity.

Greece is no longer a country awash with charity. Lots of inhabitants depend on charity but you cannot call the government a philantrophic one: most victims of this on-going crisis are the poor.

Poverty at Christmas is not funny. In December money is spent like water, lots of people are shopping for sweets and presents and others spend money on holidays or to visit family. But when you don’t have the money to do these things the festivity days are less joyfull.

Christmas is the celebration of the birth of Jesus, some celebrate it as a celebration of light, but Christmas also means days of forgiveness and charity. Look at all those big tearjerker Christmas movies where poor or unhappy people are presented with some hope for the future, just like when Prometheus gave the people a new future with the gift of fire.

There are hundreds of charity organisations to which you can give money. But I always say: Change the world, start with yourself and your own environment. In Molyvos there is a charity organisation called the syllogo i agape. It was set up in 1920 and started with helping the wounded soldiers in the Greek – Turkish war of 1919 – 1922. Since then its members, mostly village women, take care of the poor. In present day Molyvos some people still have no money for food or heating. And that is what they really need, because the cold has settled on the island and even though the sun shines a lot, causing beautiful clear days, they remain cold. And even though the moons milky-bright light illuminates the landscape there still are dark days around Christmas.

I wish everybody a Merry Christmas and a Happy 2014

December 4 – The mystery of Saint Nicholas from Tzithra 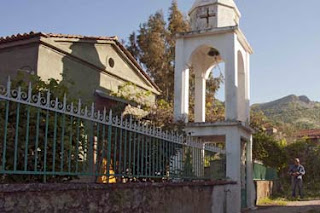 (The Agios Nikolaos Church in Tzithra)

The winter has finally set in on the island: a cold wind now blows the fruit-fly ravaged olives, oranges and mandarins from the trees. Even the last quinces cannot resist the strong winds and are falling from their branches. In one way or another the remaining pomegranates have managed to stay longer on the trees, where they’ll hang as natural Christmas decorations until the end of the month or even longer.

The olive harvest which started early this year and has not been too big. The people now kneeling on the cold earth, gathering the olives from the nets must be adjusting their shawls and headgear and regretting that they didn’t start earlier in a time when the sun still made it possible to have a picnic at the end of the workday.

But, even in Greece, December can be a winter month. And now just as the activities for Christmas have started up, inclement Saint Nicholas-weather has invaded the island. In Holland Saint Nicholas warrants a major holiday, but even though Saint Nicholas came from neighbouring Turkey, in Greece he is only celebrated through his nameday as the patron saint of sailors and fishermen. If you want to know more, you can read about Saint Nicholas, this Holyman from Patara (once a Greek village, now belonging to Turkey) and also find a link to the Dutch who may have introduced Santa Claus in America.

It’s strange that Lesvos has so little affection for the saint who has rescued many seafarers from drowning and saved children from starvation. Even though the island has many big and small harbours and in the winter the main occupation of the men can be found at sea, you will only find three well-known Saint Nicholas churches (I am sure there will be lots more, but small churches, like the one in the harbour of Molyvos, but I doubt that somebody knows all churches on the island). One of them is in Petra, at the foot of the huge rock, upon which stands the famous Maria Glikofiloussa church. So, a Maria, together with a Nicholas watch over the people at sea. Although the church of Saint Nicholas is somewhat small, it is known for its old mural paintings, some of them as old as from the 16th century.

A second Saint Nicholas church – the biggest of all three mentioned – is in Plomari. Built in 1847, it has a few nice icons and is regarded by the inhabitants as the most important church of their little city - which means that on the 6th of December public life there falls still because of the festivities for the name day of Saint Nicholas.

The third Saint Nicholas church can be found in the small village of Tzithra, a gathering of houses hidden in the greenery just below the town of Andissa. I wonder what this Saint Nicholas church is doing in a place relatively far from the sea (Tzithra is one of the few villages on the island without a sea view). The church is however mysterious. There is a mystery surrounding the enormous key that can open the church. I have been told that this key is kept by an old woman of the village (there are just a few inhabitants left), but each time I am in the village, this old lady is nowhere to be found. I have heard the same story from various people who have ventured out to Tzithra. In fact, I have never spoken to somebody who has managed to enter this holy church. So I don’t know anybody who can tell me if this church does indeed have a magnificent icon (or is it a fresco?) worth yet another visit to the village in order to hunt down the woman who keeps the key to the church. Maybe this is the beginning of a new myth: the one about the Saint Nicholas church that keeps its icon (or mural painting) a secret. Perhaps someone once was lucky enough to come across the woman with the key on the one occasion she was home; or maybe the key is just lost and no living soul cares about the interior of the church.

However that’s no reason not to visit this half deserted but picturesque village buried in the flowers of its abandoned wild gardens. You will find the road to Tzithra on the way from Vatoussa to Andissa, just a little further along from the road leading to Perivoli (a monastery which also has very beautiful frescoes, though its opening times depend on the mood of the monks who care for this now uninhabited monastery).

So the Saint Nicholas festivities are pretty local on Lesvos, but the Christmas festivities are starting up all over like upcoming Christmas markets. The one in Molyvos takes place on Sunday the 8th of December. So right now there’s lots of baking, cooking and craftsworks going on, as well as the rehearsals for the fancy dances and special Christmas carols. And when the market day is over - like there will be no money for Christmas decorations in the streets, no Christmas tree on a central place and I bet that Santa Claus won’t show up - the village will be ready for  hibernation.

The dark days for Christmas have come: the woodstove purrs, the wind blows around the house, many a friend is getting ready to leave the island for brighter places, inhabitants are still filling the sacks with olives and others are already enjoying the new harvest, because the few olives that were harvested, have made a good quality of olive oil.

So there is plenty of time to unravel the Saint-Nicholas-mystery of the absent key-holder of the church of Tzithra. On December 6th I will just have to go to the village, where - I suppose - according to tradition the church and Saint Nicholas will be honoured with flowers and other gifts. Surely, the church will be open then.

On the other hand: nothing is more beautiful than a mystery. Maybe the mystery of the Tzithra Saint-Nicholas, the church with its lost key, is more comforting than a cold winter’s day journey through a cold and bare landscape. Maybe I’d better stay home that day, next to my woodstove, dreaming about imaginative mural paintings of the saints who brought colours to our world.