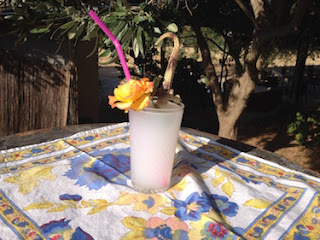 This wicked heatwave makes the skin weap thick tears and a swim in the cooling sea is the best option to get through the day. Water is the drink to survive, but besides water, a glass of ice cold ouzo can also be a solution to beat the tiring heat.

Ouzo is the national drink of Greece, although late into the night a bottle of whisky may well appear. Lesvos is the ouzo capital of the country because it produces the most (and the best). It is a relatively new drink, just as the famous Greek tomatoes were only lately introduced to the Greek kitchen. Only around 1900 the real ouziotary broke out, a welcome replacement for the unhealthy, but popular (especially in France) drink absinth.

In 1860 Varvayannis brought his art of distilling from Odessa to the island. Additionally, during the population exchange between Turkey and Greece in 1923 many Ottoman Greeks brought distillation secrets with them. You may wonder about the fact that in the Ottoman Empire alcohol was consumed. It indeed was a muslim empire, but there were so many other gods worshipped that alcohol was easy to find. Moreover the foreigners had to pay a pretty high tax for their alcohol (Müskirat resmi): no sultan wouldn't miss that.

And Sultan Selim II (1524-1574) did love a glass of very good wine; he was even called The Drunkard. Not only did his lordship reign drunkenly over his huge nation, but the father of modern Turkey, Kemal Atatürk, could also be seen more than once a day with a glass of raki in hand. His daily consumption of the precursor to ouzo is estimated at a liter a day and he finally died in 1938 due to liver cirrhosis.

Even though the coming sultan Erdogan makes life difficult for drinkers, the national drink of Turkey remains raki, distilled from the grape skins left over from the wine pressing. Those banished Ottoman Greeks that fled to Lesvos used century old procedures, but the alcohol on the island was enriched by plenty of local herbs. When driving southwards, around Lisvori you may see the ‘ouzo-fields’: anise, dill, cumin and grains, which are only a few of the many ingredients each ouzo producing family uses, each scrupulously guarding its own secrets.

Even if you visit the ouzo plant of Varvayannis in Plomari, you will not find the secret —just learn a bit more about their production and history. Also the E.V.A. that runs a little ouzo museum in Mytilini, will not reveal any recipe. The little booklet they produced – Lesvos insider – only gives away the secrets of the ouzo-island life and tells you how to make mastic-cocktails.

Lesvos is ín, Ibiza is out, was recently written in a Dutch magazine (Wow, the New World). You can see it coming: the organization of the Symbiosis Lesvos Arts Festival is in full swing, the high-profile disco oXy between Molyvos and Petra has reopened. Skala Eresou with its many cocktail bars and fancy visitors, and Vatera with its huge beach and hip beach bars, are ready for a hot summer. Also many youngsters are going to the more unconventional beaches like Drota, Makara and Crousos.

So ouzo is ín, sangria (or all those other colourfull cocktails) are out. Poor some water into the ouzo, fill the glass up with plenty of ice cubes, and together with some mezèdes and friends it will be the best remedy to the heatwave and the best way to enjoy the island that offers plenty of paradise-like holiday experiences.

(With thanks to Mary Staples)
Ⓒ Smitaki 2016

May 26 - The new Greek Herring arrived! 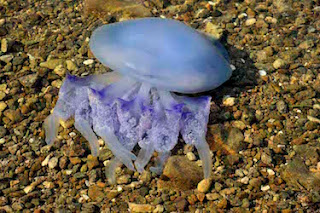 (Jelly fish are taking over the oceans)

Last week in Plomari a Basking shark (Cetorhinus maximus) of seven-and-a-half meters was brought into the harbour. The poor animal, a huge plankton sipper who could never harm a human except possibly with a fair blow of his tail, got entangled in nets just outside Vatera. He did not survive.

Yesterday I had a swim in the sea at Drotta (bordering Vatera). To be sure, I did not got far away from the beach and I kept an eye around me in case I saw a small black triangle rushing after me. I mean, the only thing I know of sharks is that they swim in the seas and I have no idea how to differentiate between a good or a bad shark. And although swimmers here never bump into sharks (just the odd fishermen far out at sea) – you never know, you just might run into the wrong guy.

I prefer swimming amid sardines that are far smaller and really have no bad intentions. But imagine if you were to find yourself in the midst of a school of sardines whose fate is to die and to wash ashore tonnes at a time, as happened last month in Chili? That sounds like a real horror scenario. That country already had a sardine prohibition because of overfishing, so bad luck there are now even less. Here at the other side of the globe there are still plenty of those little silver fish and with no hard feelings we allow them to end up on our plates.

There is not a lot that I miss from Holland, but one thing is salted herring. So I am crazy for the Greek variation of salted herring - sardèlles pastès – which are mainly eaten in the summer. In Holland it is a big event when the first salted herring of the season is brought ashore. Here in Greece this happens without any fuss; and as early as late spring, when the waiter mentions sardèlles pastès, this dish will be sold out by the time I leave the restaurant.

Another sea creature I am not keen in meeting during a swim is an octopus. It is not that I am afraid that an 8-legged monster will suddenly pop up and grab my legs (enormous squids as big as 3 meters have been spotted in the seas around Japan); but whilst I love to have one freshly caught on my plate, underwater its desire to embrace you with all his tentacles seems a bit creepy.

I read an article saying that cephalopods are multiplying more quickly than usually. Just a few years ago a study concluded that jelly fish populations were trying to take over the oceans, and now the squids and octopus have joined them.

Octopus can be very intelligent. They can predict the outcome of football matches, they know how to free themselves from where they are kept and who knows at what other smart things they excel. Up until now I never bumped into a shark while swimming, nor a sardine nor a squid, and only once accidentally into the invisible tentacles of a jelly fish. If you want to believe scientists, things will change quickly, because from the dark depths of the sea invisible dangers are lurking, just like those described in the eco-thriller The Swarm of Frank Schätzing.

Maybe its our eating habits that will provide a little remedy to the abundance that lies ahead. Believe it or not, jelly fish are as common as sardines on the menus in Asia. The Lesvorian coasts are not rich in these quivering creatures, but I am sure that in the high seas there are plenty. Jelly fish with mushrooms and cucumber? First manage to get such a gelatinous animal whole onto the beach.

You will find cephalopods aplenty on the Greek menu: fried or stuffed kalamari, octopus in red wine sauce or marinated in vinegar or grilled octopus legs. All restaurants may have one or more of these dishes on their menu.

The shark at Plomari was cut into pieces, colouring the harbour blood red. Probably it all ended up on a grill. Occasionally here on the island you might find shark on the menu, although it is one you do not have to run from a: a School shark or in Greek galeos (Galeorhinus galeus). And it is really tasty.

I will not imagine sharks ever joining squids, octopus and jelly fish in conquering the seas. But when the sardines do, I will hope that we may fish them with no limits and that I may feast - without shame – upon those delicious Greek salted herrings!