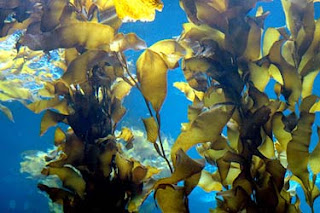 It’s mainly the media that makes mischief about the situation in these insecure times. Talk is only about the dark clouds threatening Europe and especially Greece. One specialist after the other is brought into the footlights to tell us what will be good for Greece – every day another opinion. Financial experts calculate how much Greece’s bankruptcy will cost us, although they forget to mention what it will cost the Greeks.

The Greeks who were deceived by their politicians, who were misled by international bankers were presented a huge European cream-cake, from which they ate, only now to hear that they should not have eaten from it. The Greeks, painted by the media as lazy and profiteers, are sad because of all the criticism, the deception and the economics and have lost all faith in both their own country and that of Europe.

I will not write any more about these sad times because the media is all over it. I prefer to look further than the crisis and I think it better not to become downcast but to look very far ahead, to new horizons.

I think that Greece has enough potential to change into a healthy member of Europe. The country is one big green energy bomb: sun, wind and thermal springs and everybody knows that these are the ingredients for the energy of the future. And then there is another product that has been forgotten a little in this country and that does not appear on the list of well known export products like feta, ouzo and olive oil – seaweed.

The success story of the street vendor Paul Efmorfidis started years ago in Athens when a Dutch guy asked him where he could buy a mattress. Last year Paul Efmorfidis opened his umpteenth shop on Mercer Street, Soho in New York. Coco-Mat sells mattresses which amongst other things are filled with seaweed, and is so successful that they have shops all over the world.

I have been used to visiting sandy beaches and I thought that beaches with seaweed were a nuisance. But I have learned that lying down to catch some sun on those soft heaps of seaweed is rather comfortable. So, I imagine that sleeping on a mattress of seaweed makes you sleep wonderfully, as seaweed is not only soft, but also very healthy.

Asia has the biggest culinary consumption of seaweed: in various countries different sorts of seaweed are served in salads or in combination with fish. Recently the Thai teenager Chen Jingwen became a millionaire with his business Tao Kae Noi by selling nori-snacks.

In Europe seaweed consumption is not yet that popular. The ancient Greeks, like the Romans, used seaweed in drugs and for animal food. The Irish also harvested seaweed for animal food and for manure. Seaweed is still similarly used, although different cooks have predicted that soon seaweed will be the newest culinary fashion in Europe and in Holland more and more shops now do sell seaweed.

Seaweed in Greek shops still remains unknown, even though it grows in the ‘backgardens’ of most Greeks. The Thalasso-institutes in Greece are also mostly unknown. Thalassotherapy is based on a variety of seaweed cures, going from seaweed baths to seaweed masks.

Seaweed contains amongst others iodine and contributes to softening the skin, renewing skin cells, to a faster metabolism and dissolving of fats, so it has even been advertised as a way to slenderize.

Here on the island you can find masses of seaweed. Some people do use it as manure: they collect it in the autumn, leave the winter rains to wash the salt out and in spring have a fantastic manure for the garden. I intend to fill up a hot bath with seaweed: why should I go to a spa for this? I’ll just step into a hot bath with seaweed, drop some of the weed on my face as a mask and hope that all those healthy substances contained by the seaweed will enter my pores.

Now that the temperature is on the rise again, each day on the beach I will lie down for an hour on a seaweed bed for free. Although I must admit that I am now very curious how a Coco-mat mattress will feel.

And next I have to produce some seaweed snacks, although I am afraid that here I still have some study to do – because I have a feeling that you can’t just throw just-harvested seaweed immediately into a frying pan.

And there is even another use for seaweed: it can be used as a biomass to create energy; which means that Greece not only has plenty of wind, sun and thermal energy, but could also have seaweed energy.

I do hope that not all the young Greeks will leave their country, but that some will realize how many possibilities their beautiful country has and take their chances. I do hope that these success stories of a street- vendor of jewellery in the Plaka growing into the owner of the most beautiful mattresses shop of New York and the Thai kid who became a millionaire by selling seaweed snacks will stimulate the hope that Greece will soon recover from its crisis.

And for the tourists who stay away from Greece, they will miss a lot. The word thalasso comes from the Greek goddess Thalassa, which also means sea in Greek. Even though there’s a lack of money in Greece now, they still have plenty of sun, sea and seaweed: a base for a healthy holiday, where you can make your own thalassatherapy. 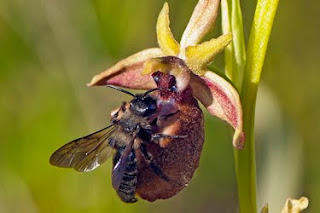 A fertilizing Andrena on an Ophrys mammosa

When somebody calls Lesvos a hornets’ nest that doesn’t mean that it’s dangerous to go there. During the last few months I have been reading in the Dutch press that Greece has become unsafe, a place best not to take holidays. Then I look around and think: what bullshit! Greece is not the only European country where strikes can disturb travelling! And the demonstrations mostly take place in the big cities; through which, in most cases, you do not have to travel when coming to Greece by plane.

On the islands life goes on as usual, crisis or not. Well — let’s say — almost. Even though the weather has rewarded the spring with summer temperatures, some hotels have been forced to open later because of decreasing bookings. And some may not open at all.

The faithful visitors to Greece know better and are not disturbed by any European slander. They know the country and how beautiful this region of Europe is and how wonderful its climate is. Lots of birdwatchers have arrived with their huge binoculars and cameras to admire the migrating birds who make stopovers on Lesvos; lots of tourists drive around to enjoy the flower garden into which Lesvos – every year – is changed during spring.

It is becoming a tradition that those pictures of the bright red poppy fields near Achladerie appear on Facebook, while the fields of red tulips near Vatera remain a secret place for only a happy few. Yesterday we met no tourists while meandering through the mountains above Parakila, where lots of sandy roads wind through the fresh scented pine forests and alongside huge impressive rocks. Nor were there people on the top of the mountain Profetis Ilias (between Parakila and Pterounda), the third highest and most idyllic lookout spot of the island. It is here that I think once apon a time a bird dropped a seed of the yellow Rhodondendron (yellow Azelea actually) so that now we can enjoy those sweet-scented massive waterfalls of flowers, tumbling down through the dark forests.

On the steep mountainsides, densely overgrown with pine trees, we watched another natural event: all those thousands – or even millions – of pine trees were flowering and those little floral clusters producing pollen. Each time a gust of wind touched the tree tops, a cloud of pollen flew out of the tree, floating to the mountaintops. I first thought that some idiot was having a fire in the middle of the woods, but each plume of smoke came from a different location and then I realized that it was the trees giving elegant smoke signals. Within weeks this yellow powder will be settled on the dusty roads and probably some tourists will wonder which stupid person has been scattering insecticide, because that’s what the pollen look like.

Some tourists come to Lesvos to look for orchids. These are two unique worlds, that of the flowers as well as that of the orchid hunters, the name I give these people. Some contain themselves to one island or a one country, others will visit as many regions as possible where these flowers grow. They are guided by the stories of other orchid hunters who share where they found what orchids. It can happen that around Agiasos – the region of Lesvos where most orchids are thought to be found – a queue of people will jog along the roadsides to look for one rare orchid. Well, those groups will keep a certain distance because when an orchid is found, it becomes a very private victory.

Orchid country is a very exciting place because new varieties are still developing. Orchids are divided in different species, which are further divided into subspecies. It is mainly the subspecies of Ophrys that keeps on producing new kinds. This is how it works: the flowers of the Ophrys look like (and have the scent of) female insects and so they try to attract the male insects who – by transferring pollen from one flower to another – fertilize the orchid. As each insect is looking for its own kind ,so each orchid specializes in attracting a specific insect (mostly bees or wasps). But it can happen that an insect by accident or laziness settles on the wrong orchid, fertilizes it and then strange babys can be born: hybrids or new subspecies.

There are orchid hunters who do not approve of all those newly named subspecies and who keep on calling the orchids by their official species’ name. And there are orchid hunters who so badly want to collect all the orchids of one region that they not only tell where one orchid is to be found but also pretend to know which species is ‘not’ growing in certain places. And so in orchid land they keep on squabbling.

Dutch photographer Jan van Lent has fallen in love with the orchids of Lesvos and has been studying the world of the orchid hunters. And here we come back to the hornets’ nest: his blog is called: The orchid paradise: Lesvos, a hornet’s nest! (http://www.janvanlent.com/blog/?page_id=519) The title refers to the orchid hunters who all have different opinions and all use different names. But first his blogs tell about his, sometimes demanding searches and exciting finds on the island, all illustrated with excellent photographs.

So Lesvos is not a hornets’ nest but a small paradise, full of different worlds with birds, insects and plants, breathtaking landscapes, a bright blue sea and traditional villages. No crisis can change that.