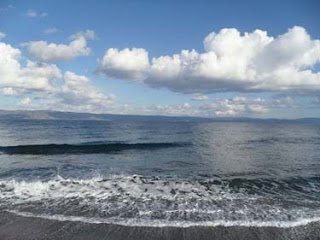 On Lesvos the traditional Christmas dish is pork meat with celery: very popular!

Let’s get the olives done 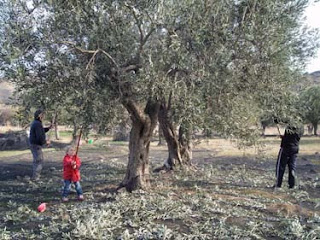 (Harvesting the olives: for old and young people)

Everybody on the island is busy picking the olives from the trees. This year the harvest has not been abundant because there was such little rain (and because of that not too many insects to spoil the fruit so the harvest is of good quality).

Each year I help friends with their harvest and after days of work my body feels totally broken. But even though it’s hard work, harvesting together with your friends can be fun. Especially when the days end with a communal dinner. This year it was also the beautiful warm weather that made it nice to help out: yesterday I could have picked the olives from the nets in my bikini, it was that warm in the sun.

In Morocco also they use wooden sticks to get the olives out of the tree. Looking at this little movie on YouTube The olive oil of Bhalil,
anyone who knows how to harvest will wonder why there are so few and such small nets under the trees. My experience is that when harvesting, you put as many nets as you can in a huge square around the trees, so that afterwards there is no need to creep around on the soil to pick all the olives that have fallen beyond the nets.

The movie shows a pretty old-fashioned olive press: with huge millstones, which here on Lesvos are only found in the museums; they make a paste out of the olives, which is spread on thin mats, which are stapled and then pressed for the oil. It is not so long ago that on Lesvos they were pressing the oil in the same way.

In America they have mobile olive presses. Those would be nice to have on the island: because the press drives to your field you are assured that the olives are pressed immediately (the quicker the harvested olives are pressed, the better the quality) and you do not have to haul all those heavy sacks full of olives to the press.

Than the fully automatic foldable, turned-upside-down umbrellas with built-in vibrators do a better job. You just embrace the tree and give it a tight hug and hoppa, on to the next tree. And women are no longer needed to pick up the spoiled olives.

It can be done even quicker if you use those monstrous machines, which drive right over the trees while at the same time picking the olives. I might be a little old fashioned, but I think this method has some minor flaws: The trees must be kept small and form long straight lines. This way you get a land full of olive hedges. Imagine if here on Lesvos they were to cut all those old and beautifully formed olive trees in order to plant rows of small trees? The landscape would be altered considerably. And harvesting would no longer be such a party: one person would just race over all those trees and finished. Gone would be the romantic harvest of the olives.

I do understand that this way you would get a bigger harvest, but what’s wrong with the olives of Lesvos, which are treasures – mostly harvested with pleasure and producing a high quality oil? I do hope that it will take some time before the wooden sticks and the nets are replaced by such all-in-one machines. Don’t forget that olives picked by hand give the best quality oil.

In Morocco donkeys still participate in the olive harvest. Here in Greece most of them have already been replaced by pick-ups. Donkeys here are even at risk of dying-out; but that is a story for another time. On YouTube you can see how they make the olive oil here on Lesvos: simply – but with care. 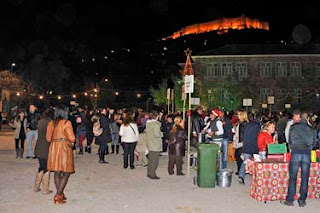 If the Greeks were to celebrate Saint Nicholas like they do in Holland, the women’s co-operatives would be busy as hell. Because the places (besides bakeries) that specialize in making sweets, are those run by these groups of women — baking cookies, making jams and marzipan.

A few decennia ago they started these local businesses to get the farmers’ wives and housewives out of their isolated position. This way they could learn to run a business and make their own income. Since 1980 at least 11 of these women’s co-operatives have been started on Lesvos and indeed it gives the women something different to do. Most of them have chosen to preserve and bake: a logical choice because, all year round in the Lesbian countryside, there is plenty of fruit and vegetables available. However preserving is time consuming, so I can imagine that sitting around a table mounted high with nuts or summer fruit, you’d happy to share this with other women whilst gossiping, discussing and laughing as you peel, de-stem and chop. These co-operatives are a solution for housewives who are bored, for women who love to cook; the small harvests are shared and preserved and this way traditional recipes will not get lost. Because I imagine these women cook exactly as their grandmothers have taught them.

As far as I know the only women co-operative that does something different here on the island is the women’s co-operative of Petra, where since 1983 women have run a Bed & Breakfast and a small diner above a pub at the central square by the sea.

At the other co-operatives, in Agiasos, Anemotia, Polichnitos, Filia, Molyvos, Parakila, Asomatos and Mesopotos, they merely make jams, the famous gliko tou koetaliou (preserved fruit and vegetables in sugar sirup) as well as baking cookies and cakes. They also make marzipan with walnut and almonds from which they create the most wonderful flowers and other decorative things. These beautiful creations are mostly given as presents at important festive events. I love marzipan, but when I get such an exotic flower I display it for weeks on the table until dust settles upon it and I have to throw it away.

I am sure they could also produce the candy that is traditional for the Dutch celebration of Saint Nicholas (characters made of chocolate, special biscuits as small as a nut, animals made out of coloured sugar) but in Greece they don’t have such a tsunami of candy at the beginning of December, because the Day of Saint Nicholas is not a celebration for children like it is in Holland. For the Greeks Saint Nicholas is the patron saint of the fishermen (see: Saint Nicholas) and on the 6th of December all people named after this saint – Nicos – celebrate their nameday.

Anyhow, the Greeks are not big candy eaters. There are some ouzo- and mastic candies, probably produced for the tourists and they make Turkish Delight, called in Greek loukoumia (jelly-like preserved fruit coated with fine sugar).

All Greek celebration days have their own sweets, mostly cakes or cookies. For example during Christmas they bake kourambides (almond cookies) and melomakarona (cookies dipped into honey); chocolate rings and balls are not part of the Greek Christmas culture. They used not to even have a Christmas tree to hang them in. Although nowadays you see more and more Greeks having a Christmas tree and chocolate rings and balls to hang in the tree. But this is a new trend coming from abroad.

The regular candy here in Greece – if you can call those candy - are the chocolate bonbons and some are so big that you better call them chocolate bonbon cookies. The easiest ones to make at home are the almonds coated with chocolate; but these chocolate fantasies are really a threat for your teeth because they are so hard.

And then there are the sugared almonds, koufeta in Greek. These are traditionally presented together with the invitation to a wedding or a baptism. They are a symbol of the good and the bad times: the bitter taste of the almond stands for the difficult times in a wedding or a life, and the sugar coating for the happy times. And you have to be sure that you put an uneven number in the bag because an even number can be divided and symbolizes a divorce.

The candy-month has started, also in Greece where they have started baking for Christmas. Last Sunday there was the Christmas market in Molyvos where they presented lots of cookies and cakes. Because of the crisis I bet that most of the women will be producing their Christmas sweets at home, baked in the wood stove of course. I wonder if the women’s co-operatives – that mostly sell at fairly high prices – will survive the ongoing crisis.