From Pirate to Prince 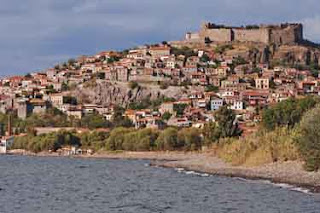 Molyvos and its castle

Once upon a time there was a pirate, named Francesco Gattilusio. He originated from a Genoan patrician family. He crossed the seas with his bandits and arrived at the island of Telendos in the North Aegean where he met John V Palaiologos, once the emperor of Byzantium, but overthrown by his father in law. Palaiologos was plotting his return to power, so who better to meet than the pirate Gattilusio. The two entered an alliance. Gattilusio sailed to Constantinople, the capital of the Byzantine Empire and by bribing the military watchmen was able to enter the city and instill a revolt in favour of John V. John V regained the throne of Byzantium and Francesco got to marry his sister. As a wedding present he got the island of Lesvos (1355). And this is how the dynasty of the Gattilusio’s of Lesvos kicked off.

Those were turbulent times: the Turkish already fighting for the Byzantine Empire and within that mighty empire there were plenty of conspiracies against the throne. And then there were those pirates, like Francesco once was, but now he was officially called Francesco I Gattilusio, Lord of Lesvos.

The Gattilusio rule was not so bad on the Lesviot people. The castles were made stronger and the people faced a century of relative peace and prosperity.

Francesco himself was not that lucky: he died with his wife and his two eldest sons in the earthquake of 1384. His third son Jacopo became his successor as Francesco II. Nor did he rule for long: in 1404 he was bitten by a scorpion. He could have survived this bite, but his death was even more bizarre. Having been bitten, he called out for help; lots of people hearing him, rushed to his rescue and flooded his room. The wooden floor not up to the crowd, collapsed taking down the crowd, including Francesco II, who did not survive.

His eldest son Jacopo then became the new Gattilusio in power: Jacopo of Lesvos. I don’t know how he died, but I know that in 1428 his younger brother Dorino reigned as Dorino of Lesvos. He died in 1455 and was succeeded by his son Domenico, who did not last long because after three years his younger brother Niccolo had him strangled and took over power. Niccolo however was also not lucky because three years later – in 1462 – the Turks conquered Lesvos and Niccolo and his family were captured and brought to Constantinople (by then under Turkish rule). Niccolo converted to Islam, called himself Prince and gathered a retinue, However Sultan Mehmed II ordered him killed because of a dispute over a ‘favoured’ page.

However, the Gattilusios, by then an extended family, were impossible to erase: many of the children having married people in power all over Europe. When I look up the genealogical tree of the Gattilusio, some of the descendants did very well and were famous. Prince Rainer of Monaco, the archduke Otto von Habsburg (the last Crown Prince of the once so mighty Austrian-Hungarian Empire), Brooke Shields and the famous French writer the Marquis de Sade: they all had Gattilusio ancestors.. (http://www.wargs.com/essays/lesbian.html).

What remains of the Gattilusios on the island now are the castles that they had rebuilt, like the castle of Molyvos. This used to be the stronghold of Mythimna (the more ancient name of Molyvos), a city state that became famous in Greek history as the only Lesviot ally of the powerful city state of Athens during the Peloponnesian war (431 - 404 BC). The castle of Molyvos, a ruin after so many other wars following the Peloponnessian, was rebuilt and enlarged by The Gattilusios. Today we still can visit it.

Some years ago the castle was restored and when the scaffoldings went down people could visit it again. However recently, visitors have often been met with a closed door. I do not know if this was because of mismanagement or the crisis. However, now whilst roads cannot be restored and when more than one household no longer has money for heating or electricity, the municipality of Lesvos has decided that the castle should remain open all year long. This is good for employment because they have hired people to ensure that this cradle of many a Gattilusio can still be visited. So people can dream about this dynasty that started as pirates but ended up in more than one European Royal family. 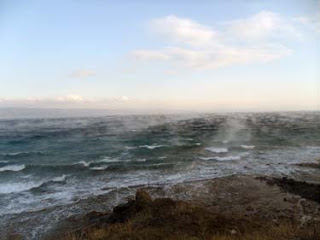 Real winter conquered the island some weeks ago. Mt Lepetimnos got sugared with snow for the third or fourth time, Agiasos was covered under a pretty thick layer of snow, as was Megalochori and other places in the Middle and West of the island and on an early morning the snow even visited Eftalou, a place not really known for such a white blanket. Now there’s a Siberian gale blowing over the island and I have heard somebody say that the wind chill is -10 °C, although the mercury only sits at 0 °C.

This morning I woke up to see that the sea was smoking. The first winter I spent on Lesvos and seeing this phenomenon – the ice-cold air above a still warm sea produces smoke above the water – I called it a ‘Marlboro Sea’. Because I didn’t speak Greek well enough to explain to my Greek neighbours that the sea was steaming, I told them that the sea smoked Marlboro cigarettes.

Whilst the sea lights another cigarette and I bundle myself up as if travelling to the North Pole (I still have to walk my dogs) the spring has opened up another offensive. And this is what I like so much about Greek winters: it is never only winter, it also is a little bit spring.

During the winter period the months were pretty dry and even now not enough rain has fallen to encourage the thirsty plants hiding under the ground to lift themselves out of the earth. Other years there were plenty of anemones around by now, but this winter there have been very few. Until last week, when serious rain wet the landscape and they came with abundance—the quite happy anemones, showing their pretty colours in the winter land.

Because of the drought there were only a few wild mushrooms in autumn and even the meadow mushrooms, which are not usually winter shy, barely appeared. Only after the rain of last week, did they spring out of the ground and I was able to pick a basketful.

The almond blossoms also don’t care for the cold. Some of them, quite courageous in view of the ice cold wind, have already opened their delicate pink petals. I do hope the tiny flower buds that they hide are frost resistant because the weather forecast predicts that in the coming days temperatures will go a lot below zero.

The icy winter landscape is perked up with the brightly coloured oranges, mandarins and lemons hanging in the trees, ready to be harvested. They will provide lots of vitamins C, a good protection for this long cold snap.

And then there’s the horta, the wild vegetables, that grow in abundance. Like the young nettles that are wonderful in an omelet. Last week I picked a horta, even more prickly than the nettles: the young leaves of the milk thistle.

Milk thistles are very healthy to eat: they are good against liver and gallbladder disease and they even seem to protect your liver when you consume too much booze.

The story goes that the white spots on their leaves are thanks to the Virgin Maria, who on her get-away from the Romans to protect baby Jesus, spilt her mother milk on the leaves of thistles.

Milk thistles in the summer can grow as high as two metres. Their leaves are pretty prickly; even their starting rosettes, from where their purple flowers (butterflies love them) will grow are already pretty prickly. It was no easy job to collect these milk thistles. But somehow you just learn how to collect them; although washing them was another dangerous job. As their rosettes lay nearly flat to the ground while you cut them there will always be some earth with it and they do need a good washing before you throw them in their hot bath to be cooked. Put on some gloves! On the internet I read a recipe that stated that you had to cut all prickles from the leaves. I think that would be a lot of work because those small rosettes have lots of leaves and those leaves have even more prickles. I certainly didn’t intend to cut all those prickles; collecting and washing them had already been a long enough job. I suspect that the writer of that recipe had never actually cooked thistles, because when the leaves are boiled, their prickles become soft and tender and glide smoothly down your throat.

So after the prickling preparations and the boiling, I removed the stems from some big champignons (the meadow mushrooms were too small to be filled), chopped the stems and fried them with diced onions and bacon. I fried the champignon caps until they shrank and removed them from the pan. I finely cut the thistles leaves, added them to the mushroom-bacon mix and seasoned it with some salt, pepper and thyme. With this mixture I filled the mushrooms: champignons filled with milk thistle! It is a nice side dish or a fine meze to go with a glass of ouzo and very good for people intending to hit the bottle.

So you see that a Greek winter does not offer only cold.