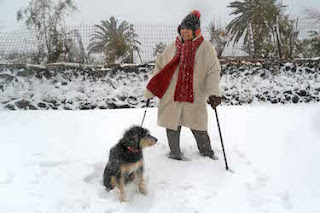 As a real amazon
you rode the Aegean waves
to battle
the poison in your body.
Even without hairs
and with so nice hats
you embraced life
like you could live forever.
India or whatever country
nothing was better than yours
especially Eftalou was calling
for your soul to rest.
Food and drinks
laughter and helping
they made your life
like you were invincible,
you smiling and talking
eating & drinking
like the world was always yours
until the gods decided different.
But you got the snow
I promised you
and now you are free
to travel wherever you want to.

Miss you, but good luck
my dear Emilaki! 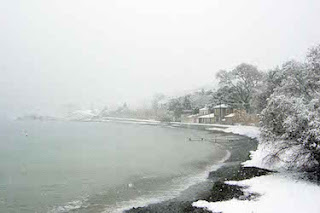 Today is the day in Greece that the water is being blessed: priests go in procession to the sea, a river or a lake, where they commence the ritual of blessing. The water from heaven must have decided to hang around for a bit, because the island has finally had a day of rain. Blessed rain!

The various harbours on the island will have been black with umbrella's and pappas. One part of the Epiphany ritual is the so called 'cross diving': the pappas throws a cross in the water and young men, happy to take a wintery bath, plunge into the water to find the cross and return it to the pappas. The winner and his family will be sure of extra blessings. Women however are excluded from this holy bathing. In earlier times they dipped cottons in the blessed water in order to clean icons; a ritual performed to renovate the holy powers of the icon.

The orthodox Epiphany is based on the baptism of Christ. In the West however on January 6 they do not swing a brush over the water, but celebrate the three kings bringing presents to the newly born Jesus in Bethlehem. Originally it was a group of wise men who saw a special star and went looking for the King of Jews: their number is related to the number of presents they brought: gold, incense and myrrh. Eventually, through the oral storytelling, the wise men became kings.

During Epiphany in the West people throw themselves into something quite different: special cakes are baked, with a small hard object, like a coin, is hidden inside. The lucky one who finds this (and does not break his teeth on it) will be king for a day and get as many blessings and luck as the finder of the cross. In Greece there is no Epiphany Cake: the Greek epiphany cake is a vasilopita and will already have been consumed on the first of January.

You would think that the name vasilopita is the Greek translation of king cake: vasilias means king in Greek. The cake however is named after Ayos Vasilis (saint Basil). Or would that name be Holy King? Santa Claus is no holy man, although Saint Basil is his personification in Greece. He however has more in common with that other holy man, Saint Nicolas, in Greek Agios Nikolaos, whose Names Day is celebrated a month earlier, on December 6th (and in Holland a big celebration). Saint Basil was a man who took care of the sick and the poor, especially children. And he came from the same region as Saint Nicolas (Turkey). In Holland Saint Nicolas brings presents on December 5th, Agios Vasilis however brings them as late as New Year's morning. To make the confusion even bigger: it is said that Santa Claus, who appeared first in America, is the same as Saint Nicolas. His celebration came with the immigrants from Europe, but in America they probably did not want another festivity day and so Saint Nicolas had to wait until Christmas to make his appearance as Santa Claus.

The Three Kings have been honoured, the waters blessed, a new year's dive performed; but about one thing all parts of the torn religion are united: after January 6th all christmas decoration but be cleared.
Agios Vassilis, Agias Nicolaos and Santa Claus have all had their parties: now we are left in the realm of the Winter King. 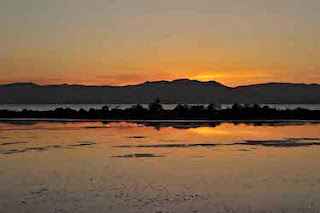 If the Martians come
will the people stop
their savage fighting and firing
so that black, white, brown and red
whatever their religion
come together to direct their evil arrows
at a communal enemy?

If the Martians come
will we then realize
how precious our earth is
with its woods and meadows
rivers and oceans
animals and flowers
which we have to defend?

If the Martians come
will we then finally understand
that we are all equal:
2 arms, 2 legs, 1 mouth
2 ears, 10 toes, 1 nose
and a big heart
to respect each other?

If the Martians come
to this world in turmoil
will all battles cease
for peace on earth
I sometimes think:
do we really need the Martians
to save the world?