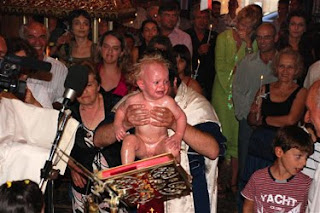 (Picture: the baptism of Nicolas)

‘My Big Fat Greek Wedding’ is very popular here amongst foreigners. Together with the even more popular ‘Mama Mia’ the movies have been leading brides and grooms to descend on the Greek islands for a romantic wedding against a blue sky & sea. However, getting a wedding organized is not so simple – not least because many a papas — the stout, friendly looking Greek priests — are not that keen on marrying people who are not Greek Orthodox by faith.

Last year, a few months before ‘Mama Mia’ hit the Greek cinemas, and thinking it rather unholy commerce, the Greek Orthodox Church moved to try and stop the wedding business. So, wedding goers wanting marriages on popular locations like on Crete or Santorini were to be disappointed. However, a year later and the tour operators are still offering weddings to foreigners. There are even catalogues, like The Complete Guide; Weddings in Greece & the Greek Islands.

Why is it so popular to get married in Greece? Probably because of the romantic locations. Greece is full of beautiful places and not only on the most well known destinations, where I can imagine you will most likely encounter traffic jams of brides and grooms.

A few weeks ago I was surprised when visiting a wedding here on the not so busy Lesvos (it was a real authentic wedding with a Greek bride and groom), that even small local weddings can cause congestion. The bride and groom and all their guests had to wait for another couple who were not yet man and wife.

Greeks also like to choose a romantic setting and this place was very special: Anayeri. Anayeri is down from Asomatos, a place full of little streams, huge plane trees, a large park for picnics (which is also used as a car park), a cute little church and a picturesque taverna, only open in the summer.

In the autumn it is one of my favorite spots on the island because you can walk through the fallen leaves, and the autumn smells and colours are at their best — but on a warm summer night, lit with strings of coloured light bulbs and spotlights it is a real dream location. There’s no blue sea or sky (which you wouldn’t see at night anyway), but there’s the smell of the trees, the sound of murmuring water and the powerful feeling that you are right in the middle of nature.

When the first couple was married and they left with their wedding group — in the dark — they caused a chaotic traffic jam with cars trying to come and go all at the same time in the middle of the forest. But once the sound of their engines had faded away through the trees, the next wedding started. After a simple service in the church, the guests sat down at tables, splendidly laid out with snow-white linen, porcelain plates and crystal glasses (which was unusual, because most weddings use ordinary plates and glasses from the taverna). All this luxury in the middle of a wood!

Later, I realized that Greeks like to marry around the 15th of August, when many family members and friends from the big cities of Athens and Thessaloniki are on the islands for a vacation. That night we encountered at least three other weddings.

My Greek baptism is quite another story. No foreign tourist would come to Greece to have a child baptized, especially after visiting such a ceremony to see what happens. It is quite cruel: taking off all baby’s clothes; dunking the baby three times under water in the baptismal font; cutting off some hair; turning three times around the font; with the baby screaming like hell — which doesn’t disturb the papas from reciting the endless ritual. Officially, the mother is not allowed to touch her child while all this is going on, which might be fine for five minutes, but after that the mother might well yell as hard as her baby: “give me back my child!” Foreign visitors who witnessed the baptism of the son of a friend of ours could hardly hide their bewilderment seeing what happened in the church; but the old Greek ladies present just had a big laugh at their outraged reactions.

You have to be very strong to organize a baptism because this is a family business and everybody wants a say in the event. Mostly the grandparents want the biggest church and the holiest priest; they want the baby to have their name; they come with their own guest list for the party (it is normal to invite not only the family but also the whole village); they criticize the invitations (which are given out to guests together with some sugared almonds and a little toy); not to mention the baptistery candle, the decorations for the church, the sweets that are distributed after the christening and so on and on. The good thing is that it’s the godfather who gets the bill for all these baptismal expenses.

When the drama at the church is finished it is time for the second act —the best part of the baptism — where even without a bride or groom to open up the dancing, everyone one eats, drinks and dances just as much as at a wedding. Greeks sure know how to party, another good reason to have your Greek wedding here! 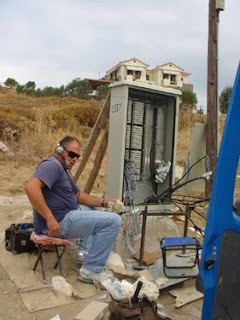 (Picture by Igor Alexander: The most famous man of Lesvos)

For us this summer was kind of turbulent. We had to say a final goodbye to a good friend and two other friends left the island because they were ill. We also had some strange pets in and around our place. First the big wasp; we had lots of little frogs jumping around and then we got the Family Mouse, which we tried to deport without the help of any poison or a mousetrap.

The biggest disturbance however was caused by the fires. We do not live in the most affected area where the arsonist of Molyvos is active —although he did once strike near here — but several friends of ours live in around the places that were struck. But besides these wildfires, there were some little fires around here. Like our washing machine recently caught fire (I never thought a washing machine full of wet clothes could burn). I think it must have been our Mouse that caused a short-circuit. However, there was an upside to it — we discovered a snake was living behind the washing machine. When we moved it away, he fled under the refrigerator, and when we moved the refrigerator, he got stuck under it. So now we can proudly say that we killed a snake with a refrigerator.

Some days later our car nearly caught fire — because we forgot to top up the water and brake oil. Our ‘garagist’ told us we should do it more often in summer, but it was the heat that made us forget, of course. Recently during a dinner at the neigbours, their bottle of gas burst into flames and our neighbour very bravely put out them out with wet towels. So you can understand that all this fire fighting has made us a bit fidgety.

Then last Sunday morning a drunken driver drove his car into a telegraph pole, just close to the camping site on the road to Eftalou. The villagers haven’t said anything about who dunnit, which makes me think it might be someone local. The rumors are about a drunken woman or an under-aged boy doing some joyriding. Anyhow, whoever it was got off lightly, but the same was not true for the telephone pole. That came down and cut off all phone lines and internet connections to the whole of Eftalou and parts of Molyvos.

On Sundays although telephones and internet are always working, the people at OTE, the Greek Telephone company don’t have emergency crews standing by. You really have to wonder if OTE cares where or not its customers in homes and hotels have phone and internet services.

I do have to admit, however, that a Sunday without internet and telephone is a surprisingly quiet day. We did not have television either because we overlooked paying our bill to the cable TV company on the due date. A weekend without news and weather forecasts is also a new experience. Although, when the weather suddenly went crazy, with summer ending, cold and rain coming we didn’t know whether it was going to snow (it certainly felt cold enough).

On Monday the telephone remained silent, and there was no internet connection either and even after we paid our bill, the cable guys didn’t re-connect us (it turned out the people who built a new window also cut the cable).

This is how Eftalou got a new attraction: an army of OTE workers has settled down near the camping site, with a different collection of cars each day, and you can see them drinking coffee, smoking cigarettes and shouting into their mobiles. They really are well set up, playing with the cables and climbing up the telephone poles. They have a lovely time with people passing by making small talk (but wondering when they will get the telephone again!) and the tourists have their cameras rolling because it is an unusual event to see such a gathering of OTE men. They now work under a brightly colored umbrella, trying to tune in to the telephone exchange, which I heard is one hell of a job.

The Greeks here now think they are living in darkest Africa. How is it possible that a repair job like this takes so much time? As I write this on a Thursday we are still without telephone and internet. Near the camping site you occasionally hear shouting so something must be happening. A day without internet and telephone can be a pleasure, but when it goes on and on, the hotel reservation system doesn’t work, you cannot get or send- mail or use skype, so modern life is impossible.

When a neighbor asked an OTE-man if he could photograph him, the man smiled brightly and said proudly: ‘I am going to be the most famous man of Lesvos. Everybody is taking pictures of me!’. I think we better put up a sign near the camping: ‘Photography forbidden!’ because if not it seems likely we will still be without internet and telephone for another week.

(However, now, as I write this on Friday morning, we are very happy to announce that late on Thursday afternoon we got our telephone and internet working, thanks to our neighbor (again, thank you Igor), who begged the OTE-man to put us on top of the list of houses to be reconnected — after the hotels. If he hadn’t done that who knows, we would have had another quiet weekend without communication).