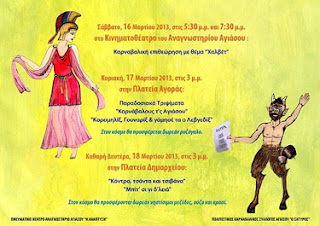 One of the treasures of Lesvos is the large village of Agiasos, which is nestled into the mountains just next to Mt Olympos. It has been there for centuries, see: Emails for Maria. And even though in the past it has been struck by disasters such as hugely destructive wild fires, the village has kept an authentic identity, which explains why it is one of the major tourist attractions of Lesvos.

When arriving in the village you will notice the fresh mountain air, which in the autumnal months becomes mixed with the perfume of overripe fruit like figs, grapes and apples and in the winter months with the sweet fragrance of burning wood stoves. This is a village where you can still find the ancient crafts of wood carving, lace making and pottery; most of these products displayed in crammed shops, just next to the thousands of icons. And each 15th of August the village turns into a place of pilgrimage thanks to its famous Mary-church.

Agiasos loves to celebrate, not only at The Ascension of Mary but also in the spring during the Cherry Festival and in autumn during the Chestnut festival. And then, nearly each year in the winter Agiasos turns for a few days into a Christmas village, with a covering of thick snow. The highlight of the winter is the carnival, another occasion to celebrate.

While in lots of countries like Holland carnival is just about disguise and beautiful costumes; carnival in Greece and in Agiasos has an important social role: these are the days when people can protest about everything that’s bothering them in Greece.

During the carnival days Agiasos changes into a village where satire reigns, where there’s an abundance of costumes, floats, concerts and theatre productions. In ancient times young men roamed between the coffee houses, dancing and singing, in order to seduce young women. But after someone, in 1902 during the time of Turkish occupation, disguised himself as Alexander the Great trying to fire up nationalism, carnival acquired another meaning for the villagers and became even more popular.

When you saunter along the steep cobbled streets, past the colourful houses and shops of Agiasos, you might get the impression of an old village full of poor country people. But Agiosos may be the most cultural place of Lesvos. Molyvos is the village of the writers and painters but Agiasos is the one of theatre and traditional music. And this is thanks to a local gunmaker who stood up for the rights to education and culture. It was in his store during the Turkish occupation that men met to read the papers (then full of news of the Greek fight for freedom) in search of their cultural and traditional identity. These gatherings became so popular that in 1894 the Agnosterion was created, a cultural organisation that set up a library where Greek papers and magazines from all over the world could be read. Hiding behind a cultural facade, their aims were, of course, political. When in 1897 word got out that on Crete the Greek army routed the enemy, Agiasos send sixty volunteers to the army, they also gathered money for the Greek army’s participation in the Macedonian war (1904 – 1908).

When Lesvos was finally freed from the Turks in 1922 the Agnosterion set up, along with activities like a gym club, a whole series of theatre productions, most of them pretty satirical. During the German occupation it formed the centre of resistance and tried to keep up the moral of the villagers, like putting a float in the carnival procession, which depicted the liberation from the Germans. During the civil war the integrity of some of its board members was disputed and the organisation dissolved, to come back in full strength in 1952. Even now the Agnosterion organizes theatre plays, concerts and other cultural events, they have also been published many CD’s and video’s.

The Agnosterion contributes to the organisation of the carnival at Agiasos. Now the donkeys pulling the floats have been replaced by cars, but still carnival in Agiosos is a celebration where poems are read, plays performed and old traditions, like the colouring people with charcoal, have been revived.

This weekend it is again carnival (the dates of orthodox and catholic carnival, just like Easter, are different). Agiasos will turn into a colourful theatre, where all problems of Greek life will be mercilessly exposed. And there are many in these times of crisis, so I think the Greeks will not have any problem to choose their subject and I am sure the Greek streets will be filled up with lady Merkels, lady Europes and corrupt politicians.

However, just like last year, the carnival celebration will be a little more temperate. In Molyos for example there is no money for a procession and I bet it will not be the only (sub) municipality with this problem. Carnival will finish with Clean Monday, when kites will be put in the air, trying to shoot to heaven, just like many a silent prayer asking that next year life will return to normal and that people can return to the usual disguises of criminals, corrupt monks or sexy weather girls.

The small white chapels belong to the Lesvorian landscape. As they belong in Greek art. Chantalle made a serie of three amazing drawings: deep roots, long wings until heaven, openness, unity, diversity and future. 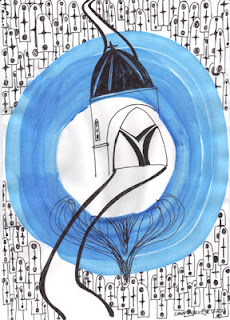 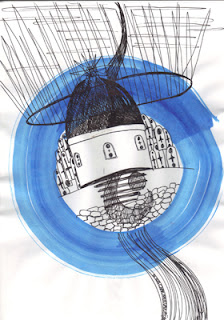 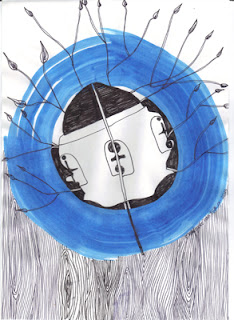 Chantalle van Eijk (born 1974) finished her study as artist in 1998, then she made long travels and got her inspiration from the faraway countries. In 2003 she fell in love with the Greek island of Lesvos where she stayed and since then lived and worked. The structures, colours and basic forms in the landscape and the sea are her main inspiration.

For more information: chantallevaneijk@yahoo.co.uk
Or on Facebook: Chanti van Eijk