May 18 – The best spot of Samos: Karlóvassi 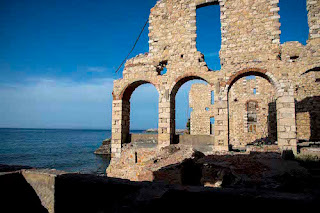 (An old building in Karlóvassi)

For one summer in the Eighties I worked for a travel agency on Samos in Samos Town. I saw little of the beautiful island, because my time between working hours was mainly spent on Gangou Beach, in those days a quiet city beach with only one taverna that had just two music cassettes. The whole day through, only the voices of Alexiou and of Parios (ena gramma) floated over the blue water of the bay.

In the evening I spent as much time there, but with different music: first in the disco, then at the bouzoukia which was above the disco. In my memories, each night was a party with heart-melting Greek songs, lots of hoppa hoppa and broken dishes.

The floor of the building where I spent so many languorous evenings and where the legs often swept through the air —now a derelict and unsafe building, standing as a sad Greek ruin at the end of the now fully developed Gangou Beach. All the sunbathers who are now relaxing there have no idea what great evenings that dilapidated building once offered.

Why an order to demolish it has not been made, I do not know. Unlike Lesvos, Samos does not have that many ruins, especially not in the capital Vathy. To find them you have to go to Karlóvassi, a place that I hated in the year I worked on the island. It was a place to quickly pass by because it seemed to consist of only huge ruins. Now I walk among them and admire all those crumbling walls of factories that once gave Karlóvassi such a splendid life.

Samos had its first golden century during the reign of terror ofPolycrates (540 - 522 BC). The famous mathematician Pythagoras – who had some revolutionary philosophies – had fled from this tyrant to the South of Italy. Having some hundred warships, Polycrates played a role in world politics. He was good friends with the Egyptian pharaoh Amasis who paid him handsomely to defend Egypt. However when Polycrates became friends with the new king of Persia, that flow of money stopped; the Persians occupied the country of pyramids and the armies of Sparta and Corinth attacked Samos. Its huge defence walls stopped them and so Polycrates was able to continue his leadership, but soon after, crazy for money, he walked into a trap of king Oroutos who killed him.

The history of Karlóvassi starts at the beginning of the 17thcentury, when settlements nestled in the mountains around a large fertile plain, where they grew mainly grapes. At the end of that century, Karlóvssi was the richest town of the island. Just like on Lesvos and in the whole of Europe at the end of the 19thcentury the grape plague phylloxera ended all viticulture. They then started to grow tobacco and to produce leather. How rich the town became can be deduced from the great mansions that arose, huge churches, various schools and even a horse-driven tram. Further history is a bit similar to that of Lesvos: the union with Greece and the war with Turkey slowed down the flourishing economy. The arrival of hundreds of refugees in the Twenties and the economic crisis in the Thirties brought the industry nearly to a stop and that is how the great Karlóvassi became partly a city of abandoned factories.

The area Ormos with its old industrial buildings is many times bigger than the same like area of Yera on Lesvos. It is pretty lively because of an explosion of building fever. Between the old dilapidated buildings, houses have appeared in all shapes and colours and even hotels have planted themselves inbetween. For some unknown reason, nobuilding istouching anotherone.It has a remarkable effect on the 'boulevard', stretching along the sea with old glorious buildings along merry newly build houses.

Lots of tourists on Samos are interested in the historical legacyof Polycrates: the temple of Hera, the Tunnel of Eupalinos and the walls of Polycrates. Only a few take interest in the more recent heritage that mainly can be seen in Karlóvassi. From a period when commercial vessels occupied the harbour, factories blew great steam clouds into the air and families in large mansions dominated daily life.

Todays Karlóvassi is partly populated by students that give the town a lively fresh air. The townhasn’t erasedthe past, but witha bit of anarchism included itin its new structure. That anarchism seems to have seeped in from the surrounding mountains where a lush jungle-like carpet of plants, bushes and trees is growing. Between these amazing dense woods, in between vineyards, many churches hide, amongst them one in a cave like a cathedral. The ruins of a Venetian castle dominate a hill not far from refreshing waterfalls and some villages built high in the mountainsare a placesof interest because of their superb views. Now that there is no more bouzoukia at Gangou Beach, I think Karlóvassi is the Hot Spot of Samos. 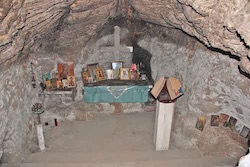 When you think about the Greek islands, you see white little houses and blue water. Green hills, ruffling trees and juicy meadows are not in this cliché. But – especially on Lesvos – in the winter green is the ruling colour. Only after the flower explosions in May the landscape slowly looses life and the grasslands turn straw-blond. People only coming in the summer and autumn may not know this.

This year everything is different. After the pretty wet winter, the rains extinguished, temperatures shot up andcreatedsomething close to a heatwave in April. The month felt like May where the heat of the day was compensated by nice cool evenings. Also nature, suddenly without rain, reacted: the landscape withered rapidly and yellowed. I wonder what kind of summer will follow.

Lesvos, being rich in many natural sources, will never dry out, at least that’s what I thought. But you see that some of those rich with water wonders do disappear. It is said through the grapevine that it is the farmers who are to blame. They drain natural sources, causing streams to dry out, for example the Pessas waterfall at Achladeri, that for years now just drips a bit; and the waterfall at Klapadosalso seems to have had its best watery time.

This week I visited the little church Panayia Zoodochos Pigi on Faneromeni beach next to Sigri. Zoodochos Pigi means life offering source (one of the many names the Holy Mary has). Indeed there used to be a source in the church that is built around an open cave. Downstairs in the cave is the altar, behind it is a huge opening in the rocks, where the source used to be. There alsoonce was a little river going from the church to the sea, where you could find huge delicious oysters.

The beach where the church has been built is named after an apparition of Holy Mary (Panayia Faneromeni). It is not clear if she was spotted at the cave, or just sunbathing on the beach. Maybe that is why the beach and the church have different names. I did not see any Maryin the cave, just a fat mouse climbing up and down the huge cross behind the altar. So there is life in this little church: the rustling even sounded spooky. When I shone a lamp at the hole in the rock behind the altar, a big black and silver snake slithered from the hole. I got a fright and ran back up the stairs. You never know what life this source is giving!

But there was no water to be seen, even though the weather gods poured so much water over the island last winter. Later somebody told me that he had seen the little church being built and even tasted those holy oysters. But since so much agriculture came to the region, slowly the source dried up, as did the little river.

Faneromeni is not entirely dependent on the Gods of the desert. A river still ripples through the landscape towards the sea, with photogenic reeds, croaking frogs and lazy turtles. It remains a watery region with abundant vegetation.

One monastery on the island did not lose water, but got a whole lake in front of its gate: the Pithariou Monastery at Erèsos is named after the gorge (which looks like a jar), that it oncelookedover. Of course it was not like from one day to the other the new lake was there andthe monks could go fishing. It is a water reservoir built to tame floods and to provide water for the local agricultural.

Lesvos has other reservoirs, like the one at Molyvos and the reservoir at the Sedoundas river, high in the mountains above Plomari.

The island nearly got another reservoir: in Eftalou.
Last week my toilet did odd things and when the plumber came to have a look he found a huge pool under the house. The house could have sailed away on this big underground lake. Tree roots had blocked the drain pipe and the hills above the house collected so much water that a reservoir had built up. It took hours to get the water away through the unblocked drain pipe.

Now I suddenly think that maybe we should have kept this reservoir. With the summer already started in April, how much water will be left in August? But then I would not have been living besides asky blue lake like the monks at Pithariou, but in a swampy brown one, a paradise for mosquitos.