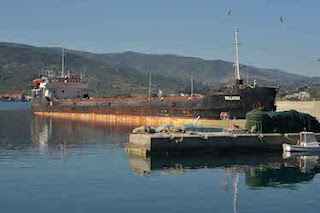 (The Bellatrix in Petra)

Yesterday was a black day for the island, when at least 16 refugees drowned during a failed crossing from Turkey to Lesvos. Only two women were fished out of the cold water, one of them pregnant. Now though the blue sea smiles at me, pretending to be innocent, but I know that she remains a dangerous thing, and not only for refugees.

Lesvos used to have mighty fleets with fishing and transport ships, with important commerce overseas (Plomari only once had a fleet of more than 200 cargo ships). There were various places on the island where you could buy new boats; the ship yards of Plomari were famous for a special kind of boat: trechantiria. Wooden boats, of course, the craft of building them going from father to son. Nowadays ships are made of different materials and the traditional fleet of wooden vessels shrinks by the day. Also European laws seem to militate against traditional built boats.

The shipyards of the island suffer with the same history. Only in Skala Loutron will you see boats docked. But that is for reparation or maintenance, because who is interested in having a new wooden boat? In Plomari, Sigri or Skala Loutron you might see, now and then, a ship simply docked in the street. There are plenty of islanders still having the skill to keep those old rigs going.

Entire forests used to be cut for the ships. And, until not long ago, the resin from pine trees was tapped and used amongst other things to waterproof the boats. All those industries have gone and even though Greece still has a leading role in international shipping, the huge tankers and container ships are not made of wood anymore, nor produced in Lesvos.

Maybe Lesvos tried one last time to compete with its neighbour Chios (where most of the mighty Greek shipping families come from): in 1972 NEL Lines was founded, a socialist company where all islanders could buy a share. The company grew and was one of the regular ferry services sailing the Aegean Sea with 8 ships. But the new century and her crisis only brought misery. The ships grew old and now they no longer even serve their home island. Last week, one of their ships, the Virgin Mary of Paros, sank in the Spanish harbour of Algeciras. Since 2012 this ship was chartered by a Moroccan company to serve as a ferry between the cities of Tarifa and Tangier. But the ship was too big and was latterly anchored in the harbour of Algeciras, where it remained because then Nell Lines already had plenty of problems. During the last few years all their big passengers ferries - Mytilene, Taxiarchis, Theofilos and European Express – were taken out of service and now you can only see the Kenteris I, II en III speeding somewhere over the Aegean waves.

The sea between the coasts of Eftalou and Turkey is not only dangerous for refugees. Somewhere in the middle a mountain peak under water, like a treacherous, invisible iceberg, reaches to the surface and many a boat has been trapped there.

Last February the 17th: the Togo registered Bellatrix, belonging to a Turkish company, did not pay attention and BANG, a collision with the famous peak stopped the boat in the middle of the sea. After the cargo of grain – destination Izmir – was loaded onto other ships and the emergency services got the boat floating again, it had to go to Petra, to undergo some repair and wait until the Greek authorities thought the ship was fit enough to continue its journey. Now, either the boat has lots of failures, or its captain rather likes to watch football, because the fact is that only two months previously, on December 4, 2016, the Bellatrix also got stranded, this time in the Russian Azov Sea, nearby Yeysk.

I presume the Greek authorities must also have some doubts, because the boat still only moves (when the salt and war ships need to dock) between the port of Petra and the middle of the bay. Now the rusty ship almost seems to belong to the landscape. Had this have happened in Holland, there would be plenty of entrepreneurs grasping a chance to open up a brilliant business: what a marvellous place to have a cafe or restaurant - it's huge deck offering a splendid view over Petra and Molyvos. But here in Greece, where having a business means years of fighting against an opaque wall of rules, you can forget about such a project. In Greece, so lumbered by its crisis, it is a nightmare to start a business, especially an unusual one. So the Bellatrix continues to float around: wasting money instead of earning money - until, just like the Virgin Mary of Paros, it sinking to the bottom of the Aegean Sea. 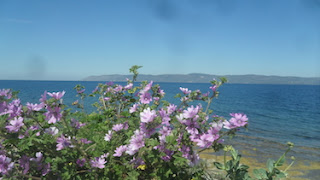 Spring is in the air and everywhere they mop, sweep, paint, mow, prune and brush: Lesvos slowly enters a new season full of surprises. Once again a new ferry connection between Petra and Turkey has been announced (at the moment there is only one, between Mytilini and Turkey). This has happened so often that everybody just thinks: “ I’ll believe it when I see it”. Moreover the much wanted ferry is not coming at a fortuitous moment: German and Dutch people are not particularly welcome on the other side of the Aegean. The Turkish ‘Sultan’ is looking for troubles with the island, as proven by daily violations of Greek airspace by Turkish fighter jets, with the biggest provocation being a Turkish helicopter flying above Mytilini for some minutes.

As far as I know the Greeks – if they do not have any connection with the Gülen-movement – can shop what they want in Turkey without being afraid. I’ve not heard of any Greek having an account at the wrong bank in Turkey and now cannot return home (like it happened to tens of Dutch/Turkish and German/Turkish people who are not allowed to go back to Holland or Germany anymore). Not all Turks seem to be afraid of the tensions created by the Sultan because they still come to visit Lesvos. Although I wonder which people they are, who still get issued a visa allowing them to travel abroad.

The Sultan would love to occupy this beautiful island (and others lying close to Turkey’s coast). Millions of years ago Lesvos was attached to the country that flies the red flag with a shrinking moon and a star. The remains of dinosaurs and mammoth-like elephants prove that Lesvos once belonged to a mainland. Much later mighty Ottomans ruled the island for a few centuries. That is right. But they ruled from an enormous empire that stretched as far as the Arabian countries up to Israel/Palestine. Those countries the Sultan has not claimed yet, has he? And has Mister Sultan forgotten his history? Before the Ottoman empire, plenty of Turkish regions were inhabited by Hellenic people (that is why there are so many Greek temples in Turkey). But we already knew that the Sultan is not good in history.

Just like Bashar Al-Assad is ruling his beautiful country with I-do-not-know-what-kind-of craziness, the Sultan also seems to be leading his country towards a steep ravine. More and more tourists no longer feel comfortable in Turkey, thousands of people, not to the Sultan’s taste, have been arrested, bank accounts are frozen and the economy wavers. Maybe the Sultan no longer knows how to get Syrian people to make the dangerous crossing on leaking dinghy's towards Europe, if he continues like this there may soon be another refugee fleet of creaky boats coming to the island – this time with Turkish people.

Of course there always have been tensions between Greece and Turkey. This is nothing new. For example it has not always been possible for tourists to make the crossing from the Greek islands to Turkey. The atmosphere depends on the rulers and for sure the Sultan is now steering towards a pretty dangerous horizon. It wouldn’t take much to happen and the ferry line between Petra and Turkey can be closed again.

It was not that bad living under Ottoman rule. Due to its great nautical and mercantile traditions Lesvos earned lots of privileges and became one of the wealthier areas in the Levant, doing business in a great part of the world, trading in olive oil, soap, wine and ships. When the Greek flag again was raised on the island, the wealth melted like ice in the sun and lots of factories and impressive houses now remain only as silent witnesses of this golden century of Lesvos.

A few years ago Lesvos became one big geopark (Unesco), but that has not brought masses of tourists, as it has to the Nature Parks of the United States, and so ‘new times’ of great economy – (partly because of the Greek crisis) has not come. Additionally there are people that think that refugees are still hiding all over the island behind the great tapestry of flowers – the red poppies, the pink tamarisks, the many coloured anemones, the blankets of orchids. Yet, when you climb up green Olympus and cast your eye along the capricious coasts of the Gulfs of Yera and Kalloni, when you become enchanted in the mountains above Plomari or clean your spirit on the deserted beaches around Sigri, you will not meet a single soul (meaning also no refugees).

Were I ever to become Sultan, I would immediately take Lesvos and make it a private island. All ingredients for a paradise are here: mysterious caves, gurgling waterfalls, steep mountains with jungle-like vegetation, all the fruit you could wish for and everything surrounded by the wonderful blue Aegean sea. The Turkish mainland boarding the Aegean is growing, so with a bit of time, the Sultan will not even have to move one finger before Lesvos will be touching Turkish soil. Although, that will take lots of patience because the land is growing at only about 1 mm a year. That the country is shifting is proven by all the earthquakes felt in the Lesvorian region, whose epicenters are mostly to be found in Turkey.

Long before that will occur, the island is entering a new season. Spring has been late, yet came pretty hastily when she decided to come, causing an explosion of flowers. The island is now at her prettiest, even though there are regions which are clearly too dry for this time of the year and are not so generous with flowers as other years.

But Lesvos is rich with water sources and will not be quickly defeated by the warming up of the earth. Just as the inhabitants keep on combatting the crisis. After all bad things that have happened the island has now been given a present, and this from the Sultan. Tourists who do not want to go to Turkey may venture out and to look for new holiday destinations under the same sun, and of course the new ferry line from the most touristic region of Lesvos to the country of the Sultan, where a Greek temple and the twin sister of Molyvos, Assos, are waiting. Or could this new ferry line bring hundreds of Turkish tourists to the island? Let's hope that this will then not turn out to be a Trojan horse.

(Last week came also the announcement of a new ferry line, a fast one, between Mytilini and Dikili)