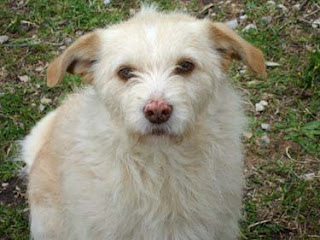 Autumn is a marvellous time: the greening landscape, the yellow and red autumnal shades, summer-like temperatures, the smell of leaves and mushrooms and the beautiful light. But autumn has also a disadvantage: the stray animals that are abandoned.

I do love the autumn but I hate this other aspect of this season. You really have to cover your eyes when you walk the streets because everywhere you see cats (mostly) jumping in your way seeking attention and food. The season of tourists spoiling cats is over and suddenly these animals are confronted with a harsh reality: they are on their own to gather food.

Some cats are used to the difference between a cold winter with a minimum of attention and food and a summer full of delicious food and plenty of nice people spoiling them. But there are also cats who, when night falls, stay in the middle of the road. A friend coming back from Australia told me that kangaroos like to sit on the road at night because of the warm tarmac. So I wonder if these kamikaze cats remain on the road for the warmth or if it is a cry for attention. To me it seems like suicide, the road is not the safest place to sit.

Greeks have never had a special relationship with pets and especially not with cats. Cats were only kept to drive mice, rats and snakes away and they were even used as food for fighting dogs. The famous writer of comedies Aristophanes (446 - 386 BC) regularly used cats in his satirical plays, as a scapegoat: they were always the ones who did it: “The cat did it” became a popular expression in that time. Alternately, in Egypt, cats were loved so much, that when one died, all members of the household had to shave their eyebrows as a sign for mourning.

For dogs it is the same story: lots of strays do not know where to go, when most people have left the island and where life gets on but mainly inside the houses. Pups are dropped at the schools, in the hope that parents will take a dog for their children; other dogs roam along the roads, in search of food and attention.

Dogs were a bit more popular in ancient Greece than cats. Peritas, the favourite dog of Alexander the Great saved him once during a battle by biting an elephant on his lips. It is said that during this same battle Peritas got wounded and died in the lap of his master. And just like at the death of Alexanders beloved horse Bucephalus, Peritas had a city named after him, close to Bucephala, nowadays Jhelum in Pakistan.

Another dog known from Greek mythology is Argos, the dog of Odysseus. He waited twenty years for Odysseus to come back from his participation at the Trojan war and his long journey home. Only when his boss finally showed up, could Argos die.

Laelaps was the dog that Zeus gave to Europe whom he had abducted and taken to Crete. There the dog was given to king Minos, who gave the dog to Procris. Procris set the dog to hunting the big fox Teumessia, which led to a paradox: Laelaps was a hunting dog who always got his prey, while Teumessia was a very smart and giant fox who never got caught. Zeus, enraged by the constantly running dog and fox, changed them into stone.

Nowadays the most well known dog is Loukanikos, the Athenian stray that last year was always seen with the protesters in the riots in the Greek capital and will certainly have a place in Greek mythology in future. Loukanikos was amongst the protesters called by Time Magazine ‘Person of the year 2011’. The last I heard about him he had retreated, probably to an adoptive home where he gets spoiled, which is better than straying into the Molotov cocktails.

More and more organisations are trying to help the stray animals, also on Lesvos, and even individuals take action like selling calendars or to sterilize cats and dogs. The Wildlife Hospital in Agia Paraskevia has stopped its main activities, but work is still going on at the animal shelter EreSOS (in Eresos) and since last year there is an animal welfare organisation Tierfreunde Lesvos in the north of the island helping people with the adoption of strays and sterilization. (Friedrun and Inge: many thanks for what you and the other people helping you do).

Last summer there also was some fuss about some people trying to free all chained dogs. However well meant, these people should realize that many dogs still help the farmers with their cattle and are for this reason tied up. Lots of them are not as badly treated as it looks and we should not forget that decades ago in our western European countries, guarding dogs at farms were kept on chains or in far too small cages.

Animal love should not get exagerrated. And Lesvos is no supermarket where you can adopt each animal you meet. Last summer I heard stories about tourists taking animals away, even though they had homes on the island. My dog also had a tourist fall in love with him and she kept on begging me for the dog to take him away from the island. Albino in fact is a stray dog who lives in the summer in a hotel where he makes sure that he gets spoiled and in the winter he lives with me. I am sure he is the happiest straydog of the island.

There are lots of others dogs (and cats) who desperately need a home or attention. Just take a look at EreSOS, Tierfreunde Lesvos, or another organisation for animal welfare and see how you can help them.

Now life seems to turn around the olives: the nets are placed under the trees and olive presses are opening their doors. All artists working on this island will be inspired by the olive trees. Like Chantalle van Eijk who was inspired by the silver-green colour of the tree and the beautiful play of lines displayed in the olive wood: The roots. 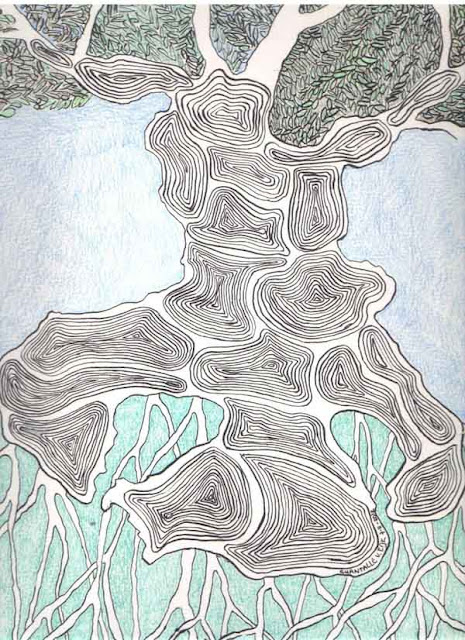 Chantalle van Eijk (born 1974) finished her study as artist in 1998, then she made long travels and got her inspiration from the faraway countries. In 2003 she fell in love with the Greek island of Lesvos where she stayed and since then lived and worked. The structures, colours and basic forms in the landscape and the sea are her main inspiration. 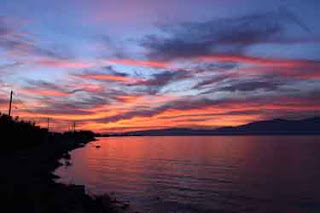 (Sunset at the Gulf of Kalloni)

Last September the average temperature was unusually high in Argentina, Australia, Canada, Greenland, Japan and Russia. I would add Greece to this list, because it was pretty hot here too and certainly too warm for the time of the year. October was also unusually warm and might even have been the hottest October ever in Greece.

The summer weather was finally chased away by a heavy rain front with thunderstorms. A week ago, the day that the world was waiting anxiously for what Sandy would do in America, we were also waiting impatiently for the rain that was predicted. First we had to deal with a two hour power failure, then we were presented with an incredible show of lightning without thunder which forced the temperature up to 30 ºC and then finally the heavens opened with the roaring sound of thunder and rain — creating a deafening rock concert. In the north of Lesvos I guess enough rain fell for the rest of the winter and I could imagine a little how the Americans felt during Sandy. Elsewhere on the island, Lisvori for instance, not so much rain fell.

You could say that the summer is boring: no clouds in the sky, high temperatures and the only variations are presented by the wind, coming from this or that direction. It seems to me that the local Greeks have divided the wind directions only in two: here in the north when the wind blows from the sea it is a north wind, when the wind arrives from over the mountains it is a south wind. I seldom hear of the west or east wind. But after a recent storm from the south – that blew the rain clouds far away from the island - we did get an unexpected wind from the west. This is a rare and dangerous wind, producing large rolling waves, that swished noisily over the already damaged coastal road of Eftalou. I was afraid that it would take the whole road into the sea, but after a few hours the wind changed and the beach reappeared as brand new, and the freshly made holes in the road were easily filled naturally with a layer of sand and pebbles which were deposited by the sea on the street (a next storm probably will undo this repair, but that we will see another time).

The north of Lesvos is known for its sunsets and in summer you will see tourists positioned on the rocks between Molyvos and Petra in order to take pictures of this daily but romantic event. However people who really like sunsets should come in the autumn, when clouds aid the creation of a far more colourful sunset: a sun descending into the sea from an empty blue sky is not nearly as suberb as a sun plunging into the sea amidst fire spewing clouds.

For example yesterday in the morning the clouds mirrored themselves in the Gulf of Kalloni: the water surface was as smooth as glass. Humid air made the mountains look pretty mysterious and these two occurences promised very nice pictures at sunset. In the afternoon the wind came and all that magic ended. But the weather gods kept their promise: when the sun disappeared behind the mountains, the clouds exploded into bright colours and the waters of the Gulf of Kalloni coloured purple: a magic sunset.

Another phenomenon of the Mediterranean climate occurs at the end of the long hot summer with the greening of the dry landscape after the first rains. Mountains and fields will colour rapidly and if you observe it with patience you may see the herbs rushing out of the earth, growing a millimetre per minute. The water from heaven will dust off the landscape and the faded colours will be replaced by fresh green grasses and the yellow leaves of trees like figs or planes.

Even the moon seems to dress up for the season. Although not entirely autumn yet, on August 31st the moon made a special appearance: for the second time in one month it was full moon and this is called a Blue Moon. This may happen each second or third year and on this occasion Greece celebrated the Blue Moon with the opening at night of some 120 archaeological sites. Some days before the big storm a huge blood red moon appeared above the mountains and last week she was dressed with a rainbow coloured halo, announcing a second deluge from heaven. Although this abundant rainfall only occured two days later.

It took some time before the rain came, bringing the few flowers that add colours to the autumn - like the rose cyclamen and the yellow and pink autumn crocus – but only very few. The olive harvesters are waiting as well so that the olives can drink the water form heaven and I am wondering if the rain that has already fallen will have satisfied the mushrooms. Did they get enough to push their heads out of the earth or will it be – like last year – a pretty poor mushroom year?

So you see, autumn weather is far more exciting than the weather during the long and lazy summer days. It is clear that whoever wants to enjoy life on the island has to stay longer than the holiday season.