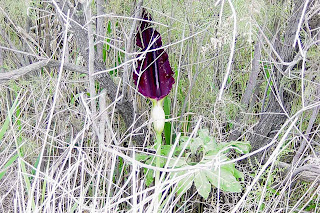 For years I have tried to get my readers to be as enthusiastic about the island as I am: I have written about its hidden treasures, about its overwhelming natural beauty, its food and its inhabitants and I have published Scatterlight Donkeys & Foxballs Ice Cream, a book with columns and photographs. What is the result of all that writing? The island remains empty this summer. Who is afraid of Lesvos?

Lesvos can be a bit scary, I admit. There are volcanoes which have been sleeping for over a million years, possibly waiting to wake up, the only traces of their last eruption being the petrified trees. In the sea there are floating stones, sea urchins, barracudas and sharks (which you may also find on your dinner plate). On that same plate there might appear weeds: chorta-la-dee-dee or wild vegetables.

Close to the capital, the graves of vampires have been found and who knows, they still may be around. In the shrubbery of the chestnut forest near Agiasos, there lurk thousands of dragons, or drakondia, the Greek name for aroids (flowers). A bigger species is the Dracunculus vulgaris, also called Dragon Arum, Voodoo Lily or Snake Lily. This little giant can grow as tall as one meter and has a huge pink to blood red spathe that curls around an enormous spadix. An excellent flower for a horror movie. It is the smaller version of the biggest flower in the world, the Titan Arum or Amorphophallus titanum, whose latin name refers to the huge phallus-like spadix that can reach a height of three meters. Just like his little sister this flower smells like hell, so you better not run into it. The Titan Arum can only be found on Sumatra, the Voodoo Lily however can be encountered everywhere on Lesvos.

Many woods of Lesvos are a bit creepy. You may bump into the poisonous yellow rhodondendron that can kill entire armies, you may run into hidden little chapels, where you can pray to be found if you are lost. You risk falling into waterfalls and there are caves you only can reach at risk to your life. The roads are amongst the most dangerous of the world because the other roadusers are roaming donkeys, flocks of sheep, sweet hedgehogs, or gossiping Greeks and birdwatchers staring through camera’s as big as stargazers; and the romantic ponds along the roads are full of turtles that beg for bread.

There are rude foxes who steal telephones, crickets whose screaming can damage your hearing and complete armies of ants that can occupy your bed. Daily there will be sunshine that can damage your skin, colouring it red or petrify it.

Most hotels on the island do not offer ‘all inclusive’, so you have to find food for yourself. Most restaurants only have Greek food and fish is served whole, and if they are small enough you are supposed to eat them with head and tails. There are no fortune cookies here, but while eating, its entirely possible that birds with forked tails will fly straight over your head: Greeks see swallows as good luck birds. Gigantic wasps may be fed with meat, in order to keep them from your table, or the owner of the restaurant may take out his old rifle in order to chase them with an ear deafening boom.

This is the Greek island that you have to avoid, because last year it was 'unsafe' because of refugees. Be aware: last weekend the roads again were unsafe, this time because of masses of pilgrims who, just like the refugees last year, were walking the roads, only now in the opposite direction, towards Mandamados where the Taxiarchis Monastery had its yearly party.

I nearly got out of the car and joined the walkers, because the island urgently needs help. Archangel Michael, whose name day was the cause for the pilgrimage, is also the patron saint of the island. He is a fighter and more than once he has intervened on earth. Last year he sent armies of brave angels to the island. Now that nearly no refugees arrive and the island has been cleaned, suddenly there are no longer any vacationers — doubling the crisis on the island. Would Michael please send some tourists?

Anyway, after writing 500 columns, I will continue reporting from this forbidden paradise, the hidden pearl of the Aegean. Because apparently people still are afraid of Lesvos! 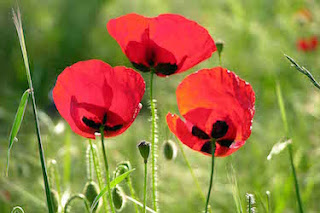 “When thunder clouds appear, quickly burn your thunder flowers"* I won't follow this old saying, because I want those thunder clouds to give rain. I study the cloudy sky and search for any cauliflower forms. Dark masses of tiny water parts hang around the mountain tops, but will they release that much wanted water from heaven? The sun still knows where to find the cracks and keeps on shining.

The island is pretty dry. The oceans of flowers have started to wither, making orchid hunters desperate: where to find those orchids which people have flown to Lesvos especially in order to see? They will now have to do with the thunder flowers, who shamelessly and dazzlingly have gathered in masses and shine as red as any tulip field in Holland. Thunder flowers do not care about water or good soil: they flourish in poor and churned soil. This way they survived the battlefields of the First World War.

It was the Goddess of the Earth, Demeter, who created this sleeping flower*. She preferred to sleep throughout the six months of the year that her daughter Persephone had to spend with Hades in the Underworld. The God of Sleep Hypnos and his son Morpheus also used this flower to close their eyes and to dream. The sleeping flower has remained along with its derivatives, like opium, a symbol for sleep, and to help people have sweet dreams or lead them to damnation. When, like Alice in Wonderland, you pass through a field full of sleeping flowers, you'd better not lay down in that bright red world: you might risk an eternal sleep.

Sorcerers loved these witch flowers*, because they had so many properties to make healing concoctions. Their medical applications are many: used not only to have a good sleep, but also to fight a sore throat or cramps. And their tiny moon blue seeds, known from the tasty German or Swiss rolls, contain rare minerals and vitamins.

Had the soldiers in the First World War known this, they would have all become addicted to the witch flower. There were so many. Especially in Flanders, the poppies spurted out of the bomb and grenade-churned battlefields and thus became symbol for the lugubrious battle that took place there. Thanks to a poem about those blood red papavers (John McCrae: In Flanders Fields), many a veteran now wears a red poppy. Be aware: no real ones. As soon as you pick a poppy, its fragile petals become as free as a bird and whirl in all directions.

If you still intent on gathering poppies, take note: in England they believed that when you picked them, you could cause a thunderburst. While in Belgium, they believed that when you burned thunder flowers, you could shoo away those nasty thunderstorms. In fact, the real flower closes its petals when the rumbling begins and the Heavens threaten to weep.

While I watch intently to see if the poppies are going to close their flowers or not, I pick some petals. I read somewhere that children used to lay a folded poppy petal on their hand and when they slapped it, it gave a loud clapping sound. The only sound I heard was that of skin to skin. I probably need more exercise. It is said that the Dutch name for a Poppy, klaproos (literally translated as clap rose), comes from this children's game. Other say the name klaproos comes from the Poppies' rattling seed pods.

Lesvos should rattle its clouds more often so that the plants, especially the olive trees, get enough to drink. Otherwise the island will get, besides the economic problem that has been enlarged by the absence of a large percentage of the tourists, a new problem. The poppies can shine as brightly as they want, but if the island doesn't get serious showers or as many tourists as there are poppies in the fields, I am afraid that many an islander is going to need sleeping flowers in order to rest at night.

*(In Holland there are different synonyms for a Poppy (klaproos), like donderbloem (thunder flower), slaapbol (sleeping flower) and kollenbloem (witch flower).