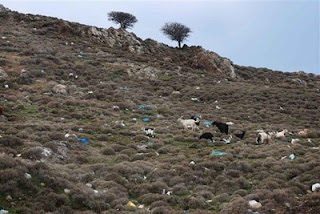 If I write that the Alkionides Days have a little drawn out, my corrector would probably correct me. Yes, I have to admit that my Dutch is far from correct and I'd probably score far below average if I participated in the Dictation of the Dutch Language (a popular annual event in Holland, broadcast on television).

My corrector not only corrects my language, but sometimes also corrects what I write about. Like he did with the Boulevard News 105, where I wrote about the traditional small summer in January. He told me that those were the Alkionides Days, or the Halcion Days and that the small summer is more like the Indian Summer, in the autumn. I promised him a correction.

Alcyone, the daughter of the Wind God Aeolus, married a mortal king called Ceyx. He drowned during a storm and Alcyone was so sad about this that she threw herself in the sea and drowned as well. The Gods took pity and changed the two lovers into sea birds (kingfishers). Aeolus kept the sea calm during two weeks in January, in order that the birds could build a nest on the rocks and lay eggs.

So the warm and windless Alkionides Days are in January, when the weather is supposed to be cold and windy. This year they were at the beginning of January, or was it the end? It's a fact that this winter produces one warm day after the other. There are so many that you can no longer call them the continuation of the Alkionides Days.

In the rest of Europe it is raining cats and dogs. On Lesvos any showers trying to reach the island are driven away by the sun or by the playful clouds. There is concern in the whole of Greece. If the winter drought continues into summer, the Cycladic islands will have to bring in water by boat and in all parts of Greece there will be days when the water will have to be cut off for hours.

The director of the Greek energy company is extremely worried. He not only has the approaching water shortages, which might cause problems running power stations, but since the beginning of the year he's also had to face a reduction by 77% of electricity coming from Bulgaria. Two nuclear power plants near Sofia have been closed by the EU, because they were not safe.

Greece is enjoying an increasing number of tourists visiting the country. The energy manager just has nightmares about these numbers. He has already calculated that during the peak days he will not be able to supply enough energy. This means that this coming summer we will not only face a water shortage, but we'll also be in the dark.

Our only comfort here on Lesvos is that the power station is under good management. Last week in Lidl, Jan met a young Dutch man who was pretty surprised to find Greek speaking Dutch people living on the island. He has not seen anything of Lesvos yet and stays secure near the power station in Mytilini, which he will be running until the end of the summer. Good for us! When the hard times without power are here, we can complaint in Dutch!

Greeks are a little afraid of change and therefore not very open to alternative ideas. If you look on the internet (which is not yet very popular with the Greeks), you will wonder at how many alternatives there are for producing energy.

For example in 2005 England exported 280,000 tonnes of rape seed, with which you can make bio fuel. But also vegetables waste can be made into fuel: America produced 11 billion tonnes of waste vegetable oil, mainly produced by potato processing plants, snack food factories and fast food restaurants. Unhealthy food is at least good for something!

This month the Greek government gave the green light to investors in zones with wind energy. Everybody knows how Greece works: it will take a long time before those projects can be realised. It will be the same for Christos Zafiris, manager of Renewed Energy Sources. He declared that Greece annually produces so much animal waste that this can run several power plants. I do hope the manager of the power net read this article as well... But I doubt that Greek farmers will start collecting the sheep shit and shipping it...

Greece has plenty of alternative energy sources. Hot water bubbling out of the ground in many locations, olive oil, rape seed fields, animal waste. It would be even better if plastic bags could be transformed into fuel: a car running on plastic bags! The car would also need a kind of sucker apparatus, collecting all the plastic bags while it is driving through the polluted Greek landscape. Greece has plenty of waste. It just needs to find an economical destination.