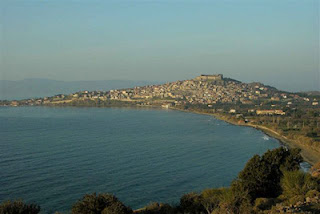 I don't understand anything about the financial transactions going on these days. This week it seems that the English Bank, Barclays wants to take over my Dutch bank ABN/AMRO. They don't earn enough money, although each year they gain millions. Where do all these billions they want to pay for the bank come from? Do all the English clients have to pay it from their meagre savings? And why then do they have to reorganize if the bank made huge gains this year? To me it's all a lot of hanky panky from the modern international business world. Mind you, I don't have any complaint about my bank in Holland.

Here the banks are quiet a different story. The office of the National Bank of Greece here in Molyvos urgently needs a take over. The interior is from the fifties: big, black, pompous furniture that barely fits into the office. There is just enough space for some clients, queuing in front of a line, in front of a row of two counters.

Greece is still a country of stamps and papers. So it takes some time to get things done at the counter. When you want information about financial matters, you can sit at a desk, just beside the queue of waiting people. There a nice lady gives you all the information you want. Summer or winter, people from Molyvos seem to have to do something at the bank every day, so there is always a line of waiting people. While you explain your financial situation, all the people, including at least two you know very well, can listen in and get an idea about all your financial transactions.

About ten years ago I was in Sri Lanka where changing money was an entertaining excursion. As a foreigner you arrived in an office where there were some 20 desks, all with a mountain of paperwork and where the employees were bent over their work. They seemed to be very busy but you could see that they secretly looked at you with one eye, as if you came from Mars. You were seated and offered a glass of water and they took your passport and the money that was to be changed. When you are abroad your passport is one of the most precious things you have. So I kept on following my passport. Because there it went, my passport, jumping from one desk to the next, while the paperwork accompanying it grew larger and larger and more and more stamps were added. After some hours the pile then disappeared into a glass cubicle where probably the boss was lurking. Half an hour later I received my passport back and a fresh stack of crackling new Sri Lankan paper money.

Visiting a bank in Sri Lanka was like entering the story 'The Castle' by Franz Kafka. Going into the bank here in Molyvos gives you about the same feeling. There are computers but they seem to do nothing other than churn out papers. When you open an account you get an account booklet that is updated each time you visit the bank. No bank accounts and we've never used the ATM, although there are ATM machines in the village.

In this village they never heard about privacy. Like they never heard about efficiency in Greek bureaucracy. You can confuse the Greeks by telling them that you bear the same first name as your father. Filling in official papers they always ask for the forename of your father. A lot of Dutch people are named after their father: Peter Pan, for example, father: Peter Pan. In Greece children are named after their grandparents. So the father of Peter Pan must be Paul Pan. So when you fill in the same name twice and they ask you three times if you are joking, they cannot believe when you explain that in Holland it is normal to be named after your father.

Well, our Greek is far from perfect, so we are always in for some confusion in translation. Just as the Greeks do not understand that some Dutch can have three or four first names. If you let the Greeks get away with writing your names, you'll be sure to end up having new fore names and a new family name.

So even though Greece is part of Europe getting involved with bureaucracy is still an adventure. We are lucky that we do not need a health book, like the people who work in the hotel, restaurant and food industry. They not only need an x-ray, but also a big collection of stamps. Those you have to get in Mytilini. Not all stamps from one office or different stamps from different counters in one building, all offices are spread around the city. So when you finally located all the offices, you'd better hope that the official is willing to work, that means, putting a stamp and seeing that you filled in the right papers. You even have to check your x-ray. Recently a friend of ours was going around with the wrong x-ray!

I don't know if the bureaucracy in Athens has improved, but I know for sure it hasn't here in Molyvos. Funnily enough, just like in 'The Castle' by Kafka, which is a story about an impossible bureaucracy, Molyvos has this huge castle looming over the village. As far as I can see, my Dutch bank ABN/AMRO is functioning okay. I suggest that all those big money makers should come to look at Greece. It must be Billy Bunterland for people who like to reorganize. With all those billions they want to pay for the ABN/AMRO bank, they could not only reorganize all Greek banks and modernize the whole of Lesvos, they could even give a million to its citizens. And those citizens in return can do good business with the banks again.