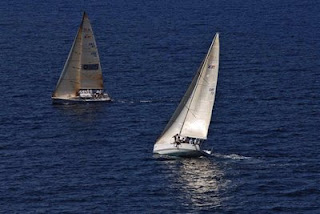 15 August is the Ascension of Maria and in Greece this day is the highlight of the summer. Every Greek tries to be away from the city. He goes to friends or family to celebrate the day with a huge meal. The islands are overflowing with people, just like the ferries and airplanes that do their best to see that this massive migration of the nation goes well.

Each island has its own traditions on this day. On Lesvos it is traditional to make a pilgrimage to a Maria church. The most important Maria church on the island is the Panagia Church in the centre of the mountain village of Agiasos. From all parts of the island inhabitants start walking to this church to honour Maria or to be forgiven their sins. It is quite a walk, because Agiasos lies high in the mountains and when you finally see the village, you still have a long climb to go. The biggest sinners that seek remission do the last few kilometres on their knees.

The climb to the Panagia Glykofiloussa church in Petra cannot quite be described as a pilgrimage. This little 18th century church is the second most important Maria church on the island. The church is on a 30 metre high rock, a 'petra' (which means rock in Greek). It has 114 steps leading to the entrance and around the Ascension of Maria many people make the climb in order to make a personal dedication to Maria. This is also a pretty stiff climb, especially for the old people who take hours once a year to get themselves to the top of the stair.

When 15 August is over, the people of Petra and Molyvos are relieved. The worst of the season is over: the troublesome inhabitants of the big Greek cities are leaving and the biggest crowds are gone.

However this year Petra and Molyvos got only a few days respite. On Monday the 20th of August the next load of demanding visitors came sailing in: The Aegean Regatta, a sailing event that is organized by different islands each year. This year the fleet went to Lesvos, Lemnos and then on to the island of Skopelos.

On Monday morning the fleet set sail from the capital Mytilini to the medieval city of Molyvos. I lay in my hammock, ready for the spectacle. Sometimes you get bored with looking out all year long over a peerless blue sea. They were supposed to arrive about three o'clock and when I didn't see anything I was afraid that they may have taken the route along the south coast. But at three o'clock sharp the first sailing ship came into view at Eftalou. The show was on.

The mild wind made the keels come out of the water and they needed a lot of manoeuvering to make their way to Molyvos. An unexpected guest was a dolphin that came to see what disturbed the usually quiet sea. Around 8.30 a lonely last sailing boat drifted past in the direction of Molyvos.

At first I counted all the boats passing by and how many crew each had. But there were so many that I soon gave up counting. No way was I going to the village that night. Each boat had at least 5 crew members and I thought that I saw at least a 100 boats. That makes at least 500 people in Molyvos harbour, which seems to be a little overcrowded for such a small harbour.

Yesterday night they had a party night in Petra. Today there are races between Molyvos and Petra. Just outside the bays of Petra and Molyvos this morning the sea was crowded. I could not see a single straight line for one boat but the chaos of all those merry white and coloured sails made a beautiful spectacle. From the beach at Hotel Dephinia you saw the sails fanning out towards the horizon. It made me think of the lakes of Friesland in the North of Holland, where in the summer in the flat green meadows you see lots of white sails floating through the landscape. In the blazing Greek heat I really was a little homesick for the flat green pastures of Friesland with their white sails.

Tonight there is another night of festivities in Molvyos and Petra. Tomorrow morning the Aegean Regatta will depart for the island of Lemnos, where again they will be partying. A day later it will set sail for the small island of Skopelos, their final destination.

Greeks do not use the sea much for leisure. Most of the ships you see at sea are ferries, fishing boats, freighters or tourist boats. Of course in the summer a small fleet of motorboats is out on the beaches, but it's as if Greeks don't like to be on the water too much. That's why this spectacle of so many white sails on the blue sea was a unique sight for Greece. It made a Dutch woman homesick for the lakes of Friesland.