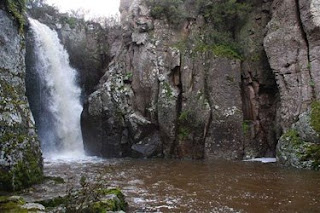 This winter you would think that it pays if all watermills get restored. People get sad about all the rain that keeps on falling and filling all rivers. Last week showers even colored the mountains snowy white and the only way to go to Anemotia and Vatoussa was when you used winter tires.

When you dared to venture out in thunder and hail, a walk became a survival trip: regularly you had to take off shoes and socks in order to cross a river that blocked a path. All that water however keeps the waterfalls running.

The most known waterfall of Lesvos is the Pesos waterfall. This one is indicated on the road from Achladeri to Agiasos (katarraktis Pesos). Last year we visited the watermill at the bottom of the waterfall close to Eresos (see: Following Sappho), in the autumn we discovered the waterfall of Klapados (see: There at the mill), where as well once stood a watermill. Last week somebody brought us to the Waterfall of Pedi, close to Mandamados, where a wide river falls from a cliff of some ten meters high.

Seeing all that wet violence it is easy to imagine that you can harness energy out of these big amounts of water. However not every winter is so rich with rain and in the summer in most rivers there is no drop of water to be found anymore. I wonder how in the early times during droughts they kept on running the many mills that existed here on the island. Nowadays they use a more secure energy: besides the normal energy on the road from Antissa to Sigri there is a windmill park that keeps on increasing.

In spite of the fact that so much rain has fallen and that there were mostly clouds, and sunshine was sparse, like every spring flowers and plants hurry out of the earth. This year, the colorful flowers are always cheer you up even when the winter seems endless this year.

I always thought that Lesvos was a green island. Even in very dry summers the extended pine tree forests in the center of the island and the millions of olive trees towards the many coastlines color the island green (green is ‘prasino’ in Greek). In the winter this prasino even hurts your eyes because of all the young new plants that grow everywhere.

However in the world there are only three green islands: King Island in Australia, Samsoe in Denmark and Utsira in Norway. Those islands are not green, meaning the color green but because they only use green energy.

We cannot always point a finger to the Greeks sinning against the environment, but the important thing is that they progress in their awakening for the environment. In the Greek capital they already started with collecting separate rubbish and they now even start to experiment with collecting the glass separated in colors. As well in the capital of Lesvos collecting separate rubbish has started and in Molyvos you can bring used batteries to the local supermarket of Timolis (as well as OTE in Petra).

Last week another big step was made by the Greek Minister of development. He gave ten million of euros to transform the small island of Aghios Efstratios, named by the Greeks as well Ai Stratos (see: Sea and Fry Travels into a green island).

Together with the neighboring island of Limnos it belongs to the prefecture of Lesvos and for sure it can use a bit more green, because it is rather a bare island. However they are not going to plant all trees there, like they regularly do on Lesvos to enrich the environment. The island will be made ready to only use green energy.

The electricity will not run anymore on petrol but will come from sun energy, wind energy and biomass. Even the cars will be running on electricity. In about a year Aghios Efstratios hopes to be one of the exclusive green islands. And if this experiment succeeds, two other small islands already asked to become green: Nisyros and Tilos.

Lesvos is still too big for this experiment. But I am sure that when the Lesvorians hear that their neighbors do not have to pay anymore for petrol, they will be first in the row for the waiting islands to become green. And they are right because in a matter of speaking the energy here you can pick up from the street: wind, sun, sea and hot springs. And not to forget for this winter: water!
Geplaatst door smitaki op Wednesday, March 25, 2009