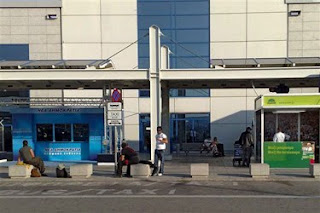 (picture: Green is for Pasok, blue for Neo Demokratia)

On the 4th of October there are national elections in Greece. The question is apart from possibly a new Prime Minister will they will bring real change?

The government has decreed that during the last two weeks before the vote the media must not publish any prognosis as to the result. Not that they are needed. It is clear that one of the two main parties will win: Neo Demokratia or Pasok. Even if they always keep on promising change, the fact is these two parties have been governing modern Greece for ages, and so any promise of real change is a hollow one.

The other three serious parties, Siriza (a green left party), KKE (the communist party) and Laos (an extreme right party) have no chance of winning, so it seems Greeks are afraid of any real change in their country.

Yesterday, when I arrived in Athens after a week in Holland, three political party stands stood together in fraternal solidarity at the exit of the airport: Neo Demokratia, Pasok and Siriza. Only at the stand of Siriza were people discussing things. Why would you ask anything of the Pasok or Neo Demokratia people? After all these years it is obvious how they govern the country: by corruption and scandal.

The columnist Niki Kitsantonis, who writes for English language weekly paper Athens Plus (not entirely online), is dead right when she says Greece has no money left for anything. And yet when the elections come around, there’s plenty of money to grease the electors’ palms, to pay the people counting the votes, for enormous billboards and advertisements and for stands scattered all over Athens.

This would never happen in Amsterdam. In the Dutch capital there was a possibility that even stands selling flowers and herring might disappear from the streets. This is because the Amsterdam city council is very busy devising new laws to make life in the city more and more dull. Because it is not allowed to smoke any more in public buildings, bar life has moved to the streets but people are banned from drinking while standing. In some quarters of Amsterdam it is even forbidden to drink in front of your own house and last week a city alderman came up with the idea that people who have been drinking should not allowed on the streets at all!

So I was very happy to be able to leave that carping country and return to the chaos of Greece. In earlier times when you flew into the old Athens airport you landed right in the chaos when you had to change flights going to the islands. After the new airport of Eleftherios Venizelos was opened in 2001, that chaos was blown away on the wind leaving only sweet memories. Even Greek passengers left chaos behind. You used to have to fight to get to the check-in desk, but now Greeks at the new airport are incredibly disciplined.

Olympic Airways, Greece biggest flight company, has now two new competitors: Aegean Airlines and Athens Airways. However they do not fly to Amsterdam, so when you want to fly to Lesvos, you better go with Olympic and your luggage is transferred and you have time for the connection between the two flights.

It was Aristoteles Onassis who bought the old Greek air company and founded Olympic Airways in 1957. He made it a company to be proud of and it always felt good to fly Olympic. Until recently you ate with a metal knife and fork and the stewardesses kept on wearing the same blue uniforms with coloured shawls.

When I flew to Holland a week ago, we boarded a Hellas Air plane at Athens. I heard that Olympic Airlines (so called since 2003 when they had a financial crisis) was to be taken over, so we flew into a black hole. The service on board was terrible, the food was pretty basic and the plane, yes, it just about flew…

Yesterday, coming back to Greece, was quite another story. Although Olympic Air officially will open on the 1st of October - after a take-over by the Marfin Investment Group – already it had new planes, stewardesses and services. I have not flown in such comfort for years, and in such a sparkling new plane with lots of space between the seats, tasty food and remarkably good service. The six Olympic rings are still on the tail of the plane, but the seats are now made of leather and, as a tribute to the decade when Olympic Airways was founded, the stewardesses wear new kinky retro dresses. We even got an Olympic badge and some super chocolate as a gift.

To spare the pride of the Greeks, the name of their oldest airline has changed only very slightly: Olympic Air. Maybe next week only the name of the Prime Minister will change from Kostas Karamanlis to George Papandreaou, but unfortunately, any other changes...