From what fruit took Eve a bite? 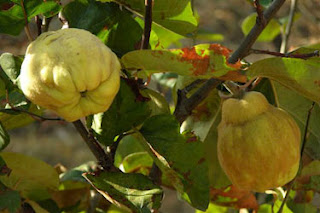 The Tree of Knowledge, Good and Evil or Forbidden Fruit stood in the Garden of Eden, where, according to the Bible’s book of book Genesis the first people lived: Adam and Eve. However, they were expelled from paradise because Eve could not restrain herself from eating the ‘forbidden fruit’.

Historians keep asking themselves: from what fruit did Eve take the bite? Was it an apple, a grape, a pomegranate, a fig or maybe a quince?

These historians are always busy wondering about fruit: what were the mythological golden apples that grew in the famous gardens of the Hesperides? These were the ones Herakles had to steal (but first he had to kill the dragon which was guarding them).

Aphrodite threw a golden apple amongst the guests at a wedding to which she was not invited, thus (indirectly) setting off the Trojan War. She also gave three golden apples to young Hippomenes who used them to defeat the goddess Atalanta during a foot race. Atalanta had to marry the man who could beat her, but when Hippomenes dropped the apples (one by one) she couldn’t resist stopping to pick them up, and so lost and had to marry him.

The question remains: were all these mythical apples from the garden of Eden, the Hesperides or the ones thrown by Aphrodite real, or were they made of gold, or were they really oranges or, as some people believe, quinces?

Lesvos has just had its first serious autumn rain, a blessing for the olives as some trees are so heavy with fruit they were desperate for water. The figs have all gone, but a few unpicked grapes are withering on their vines. The first chestnuts are falling, but most remarkable are the yellow-gold coloured quinces that you see everywhere around the island and yet few people ever pick them.

Through in western Europe and north America the quince is a forgotten fruit. It originally came from the Caucasus, and centuries before Christ it was known in Arab and Greek kitchens, and later in the Roman kitchens. The Roman cook and gastronome Marcus Gavius Apicius describes several quince dishes in De Re Coquinaria, which is maybe the oldest recipe book we now know.

However, the quince is not such an easy fruit to cook, which may explain why in the era of fast food it is not popular. If Eve really did take a bite from a quince she would have needed strong teeth, because it is like concrete if try and eat it straight from the tree. Botanists think there may have been a softer version in ancient times, because the one we know can only be eaten and enjoyed once it’s cooked. It’s taste is somewhere between an apple and a pear but it also has a magic fragrance. As well as a delicacy the quince was often used as an air refresher!

In ancient Greece, the quince was a symbol of love and people would throw quinces at newlyweds setting off in their carriage - and the pair were supposed to eat at least one to sweeten their breath. The bride then counted the pips to see how many children she would bear - a strange tradition because a quince has so many pips you wouldn’t wish that many children on any woman. The Romans also thought the quince was a symbol of love and gave them when they got engaged.

None of these customs are remembered now; the quince has lost its reputation as a good luck token and has even been forgotten as a tasty fruit and so is not much harvested in Greece. Unlike walnuts, grapes and olives, quinces are left hanging on their trees.

It is said that Charlemagne introduced the quince to France and Germany. In 812 in his Capitulare de Villis he ordered that everywhere in his empire gardens should be made to grow vegetables and fruit trees and the quince was amongst the names of seventy plants he listed. In France they still make and enjoy a beautiful quince liqueur - liqueur de coing.

The Portuguese used to love quinces otherwise we might not have had marmalade. The Portuguese name for quince is marmelo and the original marmalade was quince jam. The quince we know today - Cydonia oblonga – is named after the ancient city of Kydonia in Crete, now called Chania. The English used to make excellent jellies and jams from quinces, but, perhaps because of the cooler climate, they are not easy to find in England.

A quince tree loves warmth but is also is pretty resistant to cold - an ideal fruit for the Mediterranean climate, but a nightmare for cooks who have forgotten how to preserve fruit.

Last week a friend came with a big box full of them. I was a bit alarmed because I know how difficult it is to make them into a preserve. Actually, because they are so hard, cutting them up into slices is quite dangerous: you could easily chop off a piece of finger!

However the rewards are very sweet. Jam, jelly and liqueur are quite easy to make and as the Dutch expression goes: it’s like ‘an angel pissing on your tongue’. Here is an easy recipe for Persian quince jelly,

Peel the quinces and cut them in small parts. Put everything in a pan and add water until they are just covered. Add two cardamom seeds per quince. Cook until the fruit is soft (1–1.5 hours). Put the mixture in a cloth in a pan overnight so that all the juice comes out. In the morning weight the juice and add an equal weight of sugar then boil it until it thickens to a jelly. Pour into sterilised jars, close the jars and cool.