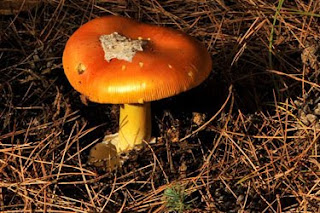 After all these years I finally found the most popular (and common) mushroom on the island: the Peppery milk cap (Lactarius pepersaus), in Greek peperites or (in local language) pefrites. I knew they grew under pine trees and that if you see a small pile of earth you have to dig for them and yesterday, in the huge pine forest above Anemotia, we saw these little mounds everywhere, including one enormous specimen (they grow twenty to be thirty cms across!).

It is amazing to realize how these sturdy milk caps find the force to lift themselves through the earth. You could use them to dig your garden! I understand now why Greeks often say they come home with several kilos of mushrooms. Some of them are so heavy I bet four would weigh a kilo.

Although I see on internet that these white peperites are not valued as a top culinary dish, it is nevertheless the mushroom that is eaten most on Lesvos. However, there are other kinds of less abundant milk cap to be found that taste even better. For example, we also found the Lactarius sanguifluus (in Dutch the Blood milk cap) and the Lactarius deliciosus, the Saffron milk cap.

The Lactarius sanguifluus looks quite scary: it is bright red and green - not colours you’d like to cook with - and yet it is more valued for its taste than its milk white cousins. I prefer the Saffron milk cap and actually fell in love with it because it reminds me of mandarins. Cut the stem, and the outer ring is bright orange. However, when you clean them for cooking parts can turn bright green. According to mushroom fanciers it has less flavour than the Lactarius sanguifluus.

There’s quite a debate about which is the most delicious mushroom: porcino or ceps (Boletus edulis) or Caesar’s mushroom (Amanita caesarea).

The ceps I know from Holland and Belgium: a real treat and easy to recognize and a few years ago we found some marvellous ones above Agiasos, but never since. Most likely we’ve been looking at the wrong time of year.

I had seen Caesar’s mushroom before, but never eaten it. This orange-red mushroom does its name proud. Maybe it was named after Julius Caesar, or, for its taste which makes it the ‘emperor’ of the Amanita family? The Romans called it boletus and in 54 BC it caused the death of one emperor. Claudius who had taken power after his nephew Caligula was murdered loved both mushrooms and women. His fourth wife was Agripinna who, before they married, already had a son, Nero. She promised him he would be emperor and persuaded Claudius to recognize him as the official heir to the throne. However, Agripinna was impatient for Claudius to die and served him a meal of his favourite Caesar’s mushrooms into which she had sneaked in a few Death caps (Amanita phalloides). That was how Nero came to power.

Amongst the milk caps we also found some Caesar’s mushrooms, which with their red caps were easy to spot in the autumn landscape. Compared to the world famous, and poisonous Fly amanita (Amanita muscaria - and also known as Fly agaric) which is red with white spots, Caesar’s has no red spots and the under part of its cap and the stem are orange. And it’s one of the world’s tastiest.

I am not a hero when it comes to eating mushrooms I do not know and when looking for ceps, I know to leave the red ones alone. So eating red Caesar’s mushrooms was quite an adventure. My host baked them with cheese, cream and cognac and they were excellent. The orange of the mushroom dish made a great contrast with the green and white of a dish of rice and chard, another with red beets and a salad of fennel and oranges.

At the end of this delicious feast one of the other guests felt faint and although we trusted our host’s knowledge of edible mushrooms, we couldn’t help thinking maybe some of them might have been poisonous. I imagined us all being rushed to hospital, so we quickly looked on the internet to check symptoms of mushroom poisoning. Feeling faint was not included and when the doctor finally arrived it was found to be a case of low blood pressure.