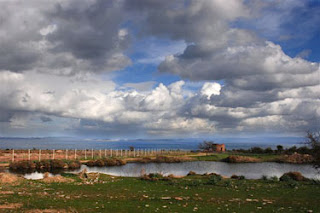 (Picture: Plati and a tower of Castro Kydonies)

The south-west storm that pestered our coast from the beginning of the new year damaged boats, trees, buildings and roads but now seems to have calmed down. The waves that struck the boulevard of Eftalou and made meters high fountains have now lost their foam. But like the coastal road in Petra, the boulevard has partly fallen into the sea and will have to be repaired. The same happened at the Olive Press Hotel on the beach at Molivos, where the waves entered and destroyed at least two rooms and the roof. Now the sky is heavenly blue: the new year really can begin.

For us the new year will be another one full of revelations about the island. At the end of last year we made an important discovery: ‘A Gazeteer of Archaeological Sites in Lesvos’ written by Nigel Spencer (ed. Tempvs Reparatvm, Oxford, England). This work has at last listed all the archaeological finds on Lesvos and now we are sure that our Lesvorian earth is still full of historical treasures. The old kalderimes and monopati, the paths that formed the road-system in earlier times are known to be centuries old. Most of them lost their function as a link from one place to another simply because villages, castles and harbors have disappeared. And over the centuries many of the ancient roads of the island have also been lost, but over centuries rather than overnight as in the recent storms.

A kalderimi was not just a path made of stones used by travelers and farmers and their donkeys. A kalderimi is a path that in earlier times connected places that were important. Not all kalderimes are preserved and some have completely vanished, or are overgrown, taken over by land use or just turned into modern roads and covered with asphalt. Most of these old paths now seem to go nowhere. And yet they will take you to the archaeological sites and with the help of this ‘Gazeteer’ by Nigel Spencer, walking on Lesvos can become like walking along the archaeological treasures of the island, leading you to perished castles, villages that have completely disappeared or old graveyards.

The three castles in Mytilini, Molyvos and Sigri that have survived history used to have serious competitors. It appears that on the northeastern coast there were many castles. Some you can still see from the traces of their walls in the ground, some rising up to a meter. Take a good walk southeast of Klio and you can find the footings of a big castle. There is also one at Plati, above Nees Kydonies, which can be reached by walking these scenic kalderimes. On the plateau there once was the famous Kastro Kydonies. Among the ruins they found shards from ancient Troy and a tower that still keeps watch.

It is said that the old village of Kydonies was next to the castle on the plateau. At the end of the 16th century or the beginning of the 17th century both village and castle were probably destroyed by a major earthquake. After this catastrophe survivors fled across the sea to what is now Turkey where they founded New Kydonies which in Turkish is Ayvalik. Ayvalik is now a little Turkish seaport town where lots of Lesvorians go by boat to do a bit of shopping.

You do not have to dig into the ground much to discover signs and evidence of these old settlements. You just have to look at old walls and houses. Because many of them – and the terrace walls that run all over the island - are made by stones that once were part of a castle or an ancient house.

Plati in its region is known as the place where you can find plenty of building stones, and not only old ones but new ones that seem to sprout out of the ground like watermelons, already ripe for a good harvest.

Sometimes I get mad at those Lesvorians who do not care about their history and let it simply disappear. Not many Greeks have sleepless nights worrying about using archaeological materials to make new buildings. Sometimes you even see parts of ancient arty style sculptured pillars integrated into the wall of a brand new house. And if earthquakes don’t do the job by bringing down an old house into a heap of stones, wait long enough and time will do it. You can see the once-cherished Turkish bath Hotel at Thermi slowly turning into heaps of debris. (TB visited it when it was still a working school for the catering industry in 1972!) And yet I do understand why Lesvorians reuse old stones. Their island is so full of deserted houses and other buildings.

Lesvos was a very poor island in the middle of the last century. People worked to survive. When you lived off your sheep, goats and a vegetable garden, you had no money to buy stones to build a house, or a shed, and so you used what you found around you. It was just archaeological recycling. In the future it will provide a nice puzzle for archaeologists who discover a Lesvorian house of the 21st century built with stones that were shaped in Byzantine times.

But in the nineteenth century Lesvos was still part of an important commercial trade route, connecting the southern Mediterranean Sea with the Black Sea. Lesvos island was a bridge between the Aegean and Anatolia (in what was still Asia Minor now Turkey). It was prosperous enough so no-one needed to build with old stones and they ordered their building materials from everywhere.

Given that there are so many castle ruins it is curious that archaeologists are so seldom seen on the island. Nigel Spencer wrote his ‘Gazeteer’ hoping he would attract more of them to dig up the history that is still hidden in the earth of Lesvos. I have the same hope, so that the Lesvorian people can discover more about their history and learn to leave all those old stones where they belong.