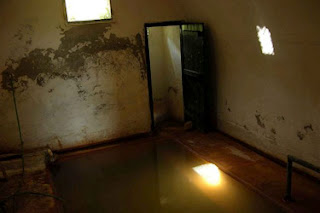 (Picture: one of the baths of Lisvori)

Nowadays people fly all over the world to find a beautiful beach where they can enjoy the sun and the sea. On warm days in summer thousands of day trippers gather together on the beaches closest to their homes. Most people take a bath to cool off or just to swim a little.

Not many people say they take a swim in the sea for their health. But the beginnings of our beach culture came about two centuries ago when the medical world decided swimming in the sea was very healthy. The salt water was supposed to be good for people suffering from asthma, rheumatism and hernias. Even drinking sea water was said to be a good to rinse out your bowels!

That is how in the 19th century quiet coastal places were discovered for recreation, and in small fishing spots like the Dutch village of Zandvoort people found another way to make money: from seaside holidaymakers.

It was as well into the 19th century before governments realized bathing was good for the health. After two serious cholera outbreaks in England (in 1832 and 1849) the government decided to build public bath houses so people could keep clean, and this initiative was soon followed by other European countries and public bath houses continued to be used well into the 20th century - until more and more houses came to be fitted with private bathrooms. Nowadays a house without a bathroom is not considered as a civilized space to live.

The first people to visit the seaside for fun and health were the rich who could afford to travel. Later on, when bathing spots were connected to public transport, the masses were also able to take advantage of a health-giving dip in the briny (TB: nice colloquial English word for sea). The rich, however, already knew about the curative properties of a spell at a thermal bath resort, and had been taking the waters at spas for centuries.

Most people think that the Romans invented these resorts, but already in Greek antiquity people took thermal baths for their health and some people even had the wealth to have the luxury of a bath installed in their home. One of the most famous exclamations ever came from someone thinking in the bath; when the Greek scientist Archimedes (287- 212 BC) supposedly shouted out “Eureka!” when “he suddenly understood that the volume of water displaced must be equal to the volume of the part of his body he had submerged.” (citation from Wikipedia). It was said he then jumped out of the bath and ran into the streets of Syracruse, the city he lived, stark naked.

Taking a bath was as well known to the ancient Egyptians. It is said that Cleopatra bathed herself in the milk from donkeys, in order to keep her lustrous beauty.

Bathing was done for health or for a religious cleansing but the Romans made bathing an act of fun. Thanks to aqueducts that could transport large quantities of water for big baths, they were able to build really large bath houses. Each successive emperor outdid the work of his predecessor. The building of the Baths of Caracalla in Rome was finished in 216 AD and the entire complex covered 25 acres, and besides baths that could accommodate 2,000 bathers there was space for 1,600 people who were just spectators watching the bathers; and there were two libraries, shops, gymnasiums and cafes. In 302 the Baths built by the emperor Diocletian were opened with room for 18.000 bathers!

Later on the Roman bath got a bad name. It was a place for secret meetings and rendezvous, for women and men of course but also for conspiring politicians. When the Christians more or less took over Europe, public baths were banned. You could not wash off your sins in a bath, for that you had to pray to God. It was at the end of the Middle Ages that the thermal baths were rediscovered. Then in the 19th and the beginning of the 20th century thermal resorts like Baden-Baden in Germany became popular spots for the European royalty and the aristocracy. The Catholic church then decreed that if they were places of debauchery they better be separate baths for women and men.

Lots of European cities, like Bath in England or Budapest in Hungary, are now still the proud owners of Roman baths and when you swim in its curative water you can imagine how luxurious they would have been in Roman times.

Lesvos has several hot springs but no big thermal resort. The remains of the Sarlitza Palace built at the beginning of the 20th century - the ruins of a hotel now known as the Old Turkish Bath Hotel - shows that Thermi was once a fashionable thermal resort. The many archaeological findings from Roman and older times prove this as well. (TB:The Ottomans were also keen on water and as well as fountains and taps in most of our villages they built a few public bath houses too. Molyvos had one in the centre of town, but when the water heating system broke down nobody could find the money to repair it, so it’s a gently decaying ruin. TB remembers using it several times in 1972)

Naturally occurring hot springs on Lesvos are small and simple and run by the municipalities. But they do give you a really romantic feeling. But none of these places have the grandeur of bathing places like Spa in Belgium or Karlovy Vary in the Czech Republic.

The two baths of Lisvori are also very simple and small. You use one by yourself (or with your own company). The municipality of Lisvori decided it needed restoration, to make it a more attractive place. The hotel rooms were renovated and the workers started to work on the oldest bath (from the 14th century). When the head of the island’s archaeological service came to inspect the project she went crazy when she saw workers rebuilding the bath with concrete! The work was also halted because the municipality actually did not have permission from the archaeological service to make the restoration.

Now the fights are over and the work has started again. There’s a new big concrete parking lot already finished to welcome you! The mayor however has promised that it will eventually be paved with nice old stones and trees will be planted to give the place some greenery and shade. He also promised that the baths will be ready to reopen in March. But this is a Greek promise (meaning that it can take much more time). Lisvori will never be as big as the Roman Baths of Caracalla but the renovation is definitely progress; a little thermal resort in beautiful surroundings where you can find hotel rooms and some titbits to eat.